Incoming chair Steve Deveaux recounted the Building Industry and Land Development Association’s recent accomplishments and laid out his vision for his two-year term in his inaugural address at the annual Chair’s Dinner on Tuesday evening. 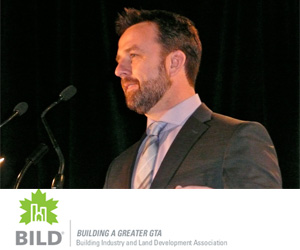 BILD has more than 1,450 members and is the voice of the land development, home building and professional renovation industry in the Greater Toronto Area (GTA).

Deveaux is vice-president of land development at Tribute Communities and in charge of its high-rise and mid-rise development approvals. He previously worked in Monarch Corporation’s high-rise division and spent time as a City of Toronto planner.

Deveaux was formerly the BILD Toronto chapter co-chair and has been a member of the BILD board of directors and executive over the last few years. Under outgoing chair Steve Upton, Deveaux was first vice-chair and instrumental in voicing BILD positions on important issues at the municipal and provincial levels.

“BILD has built strong relationships with our government partners based on intelligent, solution-based conversations, trust and compromise,” Deveaux said in reference to the sprinkling of regional chairs, mayors, councillors and provincial government staff in the audience along with more than 400 BILD members.

“It’s time that we work together towards our common goals and find creative funding solutions so that we can get people moving, get land serviced, get homes built and help our communities thrive.”

Deveaux mentioned the importance of partnering with the Ontario Home Builders’ Association (OHBA) in getting the province to amend the Ontario Building Code to allow for six-storey wood-frame construction starting on Jan. 1, 2015. He said this amendment will unlock mid-rise building potential across the GTA.

BILD and the OHBA will be active in this year’s provincial review of its Greenbelt and growth plan legislation and plans to work with government partners to find solutions that meet everyone’s needs, according to Deveaux.

“All of the dots will really be connected with these two tandem reviews: transportation, transit, infrastructure, growth management, whitebelt, proper green space preservation. It’s all about building communities and we are in constant discussions with the regions of Halton, Peel, York, Durham, Simcoe and the City of Toronto — through the hard work of our volunteer chapter chairs and chapter members — discussing implementation, servicing and planning for the forecast growth of the GTA.”

Attracting and retaining BILD members and continuing to change the public’s perception of the building industry is a major goal, and part of the plan to do that involves better educating people about the strength of the industry.

Deveaux said the Ontario building industry created 177,000 jobs and generated more than $10 billion in wages in 2013.

“The communities we build generate residential and commercial tax revenue for every municipality across the GTA and in many cases, as in the City of Toronto, the residential intensification of the downtown has resulted in a dramatic return of the office sector back to the core, to the tune of 4.7 million square feet and counting of new office space since 2009.”

“Transit” will be this year’s buzzword when it comes to infrastructure, Deveaux said, adding it needs to be accompanied by transit-oriented development plans to ensure it remains sustainable into the future — and isn’t entirely funded by piling higher development charges onto new homeowners.

Deveaux said the GTA housing market is complex and unique in Canada and that the federal government needs to examine the variety of factors at play and consider adopting responsible “made-in-GTA” practices that support people’s ability to invest and live in the country’s most populous region.

Federal government decision-makers also need to understand Canada’s renovation industry is a more than $66-billion business — “and that’s just what the government knows about,” Deveaux said to nervous chuckles from audience members.

“The underground cash economy in renovation is big business, and quite aside from the lost tax revenues flowing to the government, there is a real financial and safety risk to those choosing to use uncertified and often unqualified contractors.

“A permanent home renovation tax rebate or credit — tied to affiliation with qualified, certified renovators such as those who proudly wear the RenoMark brand at BILD — would provide a necessary incentive to consumers to make a smart decision when choosing their contractor.

“Our renovator members are true leaders and ambassadors for our association, and it’s time we showcased them to all levels of government as a model for what people should come to expect when they put their home in a renovator’s hands.”

BILD acquired sole ownership of The GTA Home and Reno Show last year, and it will be held from Feb. 13 to 16 at The International Centre in Mississauga. It joins the National Home Show in March and the Toronto Fall Home Show in October as showcase events. It’s hoped online voting for the People’s Choice Award as part of the 2015 BILD Awards will further increase public engagement.

Deveaux reinforced BILD’s continued commitment to raise money for Habitat for Humanity GTA and told members there will be time to play in addition to the work planned for 2015 via such events as softball and volleyball tournaments, a charity barbecue, Ride for Humanity and Party for Humanity.

“I look forward to getting out there and showing our strength as your industry association chair,” Deveaux concluded. “You won’t regret putting your faith and trust in me.”