If there was one real estate sector in Canada that is under-developed relative to the U.S. market it is self-storage. It may be that Canadians hoard less stuff than their southern cousins or, more likely, their garages and backyards are simply more crammed and cluttered. 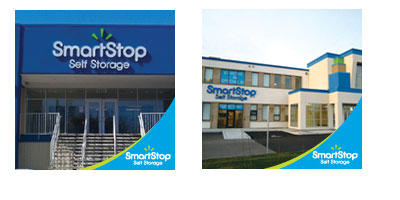 SSTI owns 122 properties in 17 states and in Canada, operating under the SmartStop Self Storage nameplate. Without much fanfare, its operations north of the border comprises four properties in GTA and expects to grow from there.

“We intend to continue to acquire either in-place, stabilized facilities or if we can’t find properties that make economic sense, then we are developing,” said Wayne Johnson, the company’s senior vice-president of acquisitions.

Strategic Storage has found the pickings to be slim, so he expects development will be the main vehicle for expansion in Canada in the future.

Three of its four Canadian properties fall under the development category. Its first property was the purchase of an existing self-storage building that was underperforming (Dufferin St. shown on left in image), followed by the conversion of an existing warehouse facility in Mississauga (shown on right in image) that was converted to storage and a new build in Brampton. In September, the company announced that it had acquired an industrial building in Pickering for $5.4 million.

“Toronto appears to be underserved, although it is an expensive place to build,”  said Johnson, who is based in Dallas. “The demographics would support not a traditional amount, but some development.”

He characterizes the competition as a mixture dominated by regionally owned players. That puts Strategic Storage in the position of underdog in the GTA.

While he has spent some time in the GTA and is up to speed on the latest follies of Toronto Mayor Rob Ford, Johnson is reluctant to look into the corporate crystal ball with regards to Strategic Storage’s future expansion in the region.

“Ten years out? That is hard to say. Five years out, we are hoping to add another five to 10 facilities if we can locate them. We are not just going to pull the trigger to get deals done. It is quite expensive to build up there.”

In the three years it has been in Canada, the company has done both new construction on raw land (Brampton) and re-purposing of existing facilities. Given that self-storage facilities are best located close to where people live and work, there will be more opportunities for re-development in the future.

“It is pretty obvious that the closer into the core you are getting, the likelihood is you will be converting a building or tearing down something,” Johnson said.

According to Acorn Storage Inc. of Creemore, Ont., which aims to do its own bit to consolidate the storage market in Canada, the country is ripe with potential. On its website (acornstorage.ca) it lists how Canada lags:
•  Currently at lower than 50% of the maturity levels of the American self-storage industry.
•  Fewer than 1 in 20 households currently use self-storage (half the rate of U.S. households).
•  Total net rentable square feet represents just 2.5 square feet per capita (versus 7.5 per capita in the U.S.).
•  Highly fragmented, with few national brands and mostly independent owner/operators owning only one facility.
•  Canadian real estate investment companies and institutional investors have only recently begun to recognize self-storage as a legitimate asset class.
•  Current focus for large real estate investment companies and REITs is on building portfolios in major urban markets, acquiring and developing properties of 50,000 sq. ft. or more with stabilized occupancies.