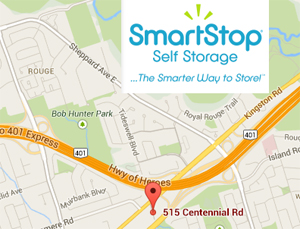 The new project, announced by the company at the end of April, will include three one-storey and three two-storey buildings with approximately 78,000 net rentable square feet. It will be branded under the trade name SmartStop® Self Storage.

“We targeted this land in the district of Scarborough due to its prime access from the 401 Expressway and Kingston Rd. (Hwy 2A),” H. Michael Schwartz, chairman and CEO of SSTI, said in a news release. “This new ground-up development underscores our long-term commitment to self-storage in the GTA.”  The new SSTI location is shown on the map above at 505 and 515 Centennial Rd.

Dufferin St. had been acquired in 2010 as the take-over of an existing self-storage building. Mavis Rd. was the company’s first redevelopment project in the area, followed by Brewster Rd., acquired in July 2013, which required the conversion of an existing warehouse.

The fourth property, on Granite Court in the city of Pickering, is currently under development. The former industrial building, acquired for $5.4 million, will add another 890 units with 91,000 NRSF once it is converted. It is expected to open during the fourth quarter of 2014.

Wayne Johnson, the company’s senior vice-president of acquisitions told Property Biz Canada, “We intend to continue to acquire either in-place, stabilized facilities or if we can’t find properties that make economic sense, then we are developing.”

Since launching in 2008, SSTI’s portfolio has expanded to include 125 properties in 17 U.S. states and Canada that are being branded as SmartStop® Self Storage. The portfolio includes approximately 79,000 self-storage units and 10.4 million rentable square feet of storage space. Collectively, the SSTI has more than 50 years of self-storage experience and has completed more than $10 billion in real estate transactions.