Three leaders of prominent Canadian real estate companies shared their views and strategies with a packed hall of interested onlookers at the Real Estate Forum at the Metro Toronto Convention Centre recently. 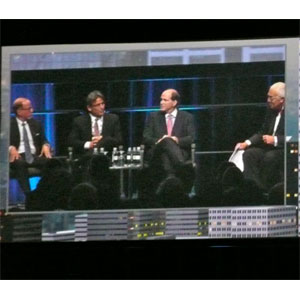 “At this point in the cycle, more than ever you have to make sure you have the right asset selection and the right market selection,” said Bentall Kennedy chief executive officer Gary Whitelaw.

“We’re focusing on cities that have sustainable growth and are creating employment.”

Bentall Kennedy, acquired by Sun Life Financial earlier this year, will have done about $2 billion in property acquisitions and investment in new developments by the end of 2015.

About 70 per cent of that will be from the United States, and the American growth cities Whitelaw alluded to include San Francisco, Boston, Seattle, Denver, Austin and Charlotte.

“Many of the other more traditional markets are pretty tepid,” he said. “Financial services growth in the traditional cities has not yet returned to the level it was at before the financial crisis. You’re very much seeing a two-speed economy in the U.S., and our focus is on investing in those innovation cities.”

Oxford Properties Group has grown from a $16-billion business with 93 per cent of its holdings in Canada five years ago to a $40-billion company with 62 per cent of its properties in its homeland today. It seeks to have a 50-50 split while becoming one of the 10 biggest real estate companies in the world by 2020.

“We’re growing every year in Canada, but the exponential growth for us is particularly in the U.S. and the U.K.,” said Oxford president and CEO Blake Hutcheson, who specified New York City, Boston, Washington, London and Paris as the company’s key international markets.

“If you focus on a trade area and you have the best real estate, good access, good visibility and you stay on top of your tenants and technology improvements, you’ll have success,” said First Capital chairman Dori Segal.

“A shopping centre with 70 or 80 per cent occupancy is either an opportunity or a trap, and you have to make up your mind.”

Whitelaw said restaurant and bar sales have just surpassed those of grocery stores in the U.S., which he attributed to a demographic shift that will see four million people a year turning 25 for the foreseeable future. Their retail, office and residential preferences will be different from older generations, which can create both challenges and opportunities.

“The world in 2016 will be very different from 2006 because of demographics and the millennial generation becoming decision-makers and wanting more mobility,” said Whitelaw, citing a desire to move from suburban corporate office campuses to urban space clusters with more employers and like-minded people.

“That ripples through everything we do. We’re seeing more of that in some of those markets in the U.S. than we have in Canada, but I really believe that trend is inevitable.”

Oxford’s portfolio is comprised of about 50 per cent office, 25 per cent retail and a mix of other properties. It’s cycled out of secondary markets and many of its suburban assets and, if the company can’t buy the best office properties in one of its focus cities, it aims to build them.

“Developing new product works,” said Hutcheson. “You get 20 to 30 per cent appreciation in value over cost upon completion.”

Never run into an emergency

Segal and Whitelaw stressed the importance of not financing deals with large amounts of debt despite all the cheap capital now available, and to prepare for things not working out as planned.

“The number one job of a person who runs a real estate business is to make sure you never run into an emergency,” said Segal.