Strathallen Capital Corp. this month marked what it hopes will be the next stage of its evolution: the purchase of The Shops at Morgan Crossing, which pushes its assets under management to more than $1 billion. 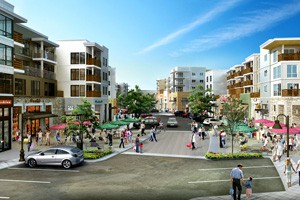 Purchased on behalf of AIMCo Realty Investors LP for an undisclosed price as a core investment, Strathallen will hold and manage the Greater Vancouver-area shopping centre on AIMco’s behalf.

“This is really us doing more core direct deals as opposed to value add” deals, said Laetitia Pacaud, president of the Toronto-based real estate service company. “When you are looking at the size of the deal, it is very much a platform changer for Strathallen.

Those value-add retail acquisitions, central to Strathallen’s growth since 2005, are represented by three retail property closed-end funds that each hold $200 million to $300 million of assets for institutional investors.

Discussions resumed this year which led to the real estate company approaching AIMCo as a potential buyer.

“We have been trying to do more core retail deals,” he said. “This is a definitely a very, very big step in the right direction.”

The centre is well-located near 24th Avenue and Highway 99 and is surrounded by “tremendous residential growth and complementary retail centres,” including Walmart, Home Depot and a Loblaws (Superstore).

Saguy said his firm is likely not done with making headlines. “I can tell you that I have about two or three other core deals that I have been working on for quite some time.

“They are not fully baked but they will come to fruition. So hopefully this is a step in that direction, doing more direct core deals with institutional investors.”

Strathallen is coming off its busiest acquisition year in 2014, when it added in excess of $100 million in properties, predominantly for its closed-end funds. The firm is on pace to easily double that, said Saguy.

“If we had the deals that I have in the works right now, we will be doing about $250 million in acquisitions.”

The company is also working on raising capital for its fourth retail property fund and is expecting to raise another $200 million to $250 million.

“We are predicting that this AIMco acquisition will be the first of what we hope to be more direct deals in the core retail space because we know how to manage retail, particularly grocery and drug-anchored,” said Pacaud. “After we close those, we will look at other areas to grow the business,” she added.

Strathallen was a major player in the industrial space before selling its portfolio to Dundee Industrial REIT two years ago.

“We have a track record in industrial and we also know the capital markets,” she said. “We consistently look there for opportunities. Once we get the low hanging fruit, which really is leveraging up our retail platform, to go back and say ‘Can we reignite this industrial track record that we have and look to either do some direct deals or actually do a fund?’ ”

It will not likely take long to return to industrial if the firm ultimately decides to go in that direction. “We are a small entrepreneurial shop,” the president explained.

Strathallen is majority-owned by co-founders and directors Brian Spence and David Wright with Pacaud and Saguy holding smaller stakes in the company. “Jonathan and myself are moving towards a higher ownership interest and are very motivated to grow the business.”