Developers are wooing university and college students with budget-priced residences featuring amenities such as swimming pools and fitness centres. It’s hardly an accident these new student residences look like hotels. 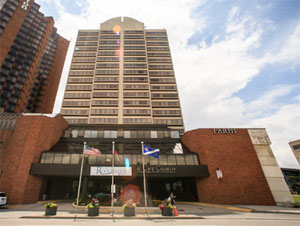 The most prominent company in the forefront of the trend to convert hotels into student residences is Campus Crest Communities Inc., an American REIT  making its first foray into Canada with the purchase of two Montreal hotels.

Working in a joint venture with Beaumont Partners SA – an international private investment and equity firm based in Geneva and London, England – Campus Crest bought the Holiday Inn Midtown and the Delta Centre-Ville Hotels, both in close proximity to the McGill University campus.

The partnership paid approximately $65 million for the 488-room, 22-storey Holiday Inn and about $60 million for the 711-room, 33-storey Delta Centre-Ville Hotel. The latter has already been rebranded as evo Square Victoria.

The Holiday Inn is located approximately 200 yards from McGill University. Campus Crest said it would attract students to the new residences by offering “an upscale housing alternative with modern, attractively furnished rooms and a range of amenities.”

The company added that a lifestyle program with an “array of fun, diverse activities and events” would be available to residents. The building comes staffed with a general manager, a leasing manager, community assistants and a “courtesy officer for security purposes.”

The Delta is above the Square-Victoria Metro Station, offering easy transportation to McGill, Concordia University, and L’Ecole de Technologie Superieure. Collectively, those institutions serve more than 81,500 full-time students, according to Campus Crest.

The hotel-turned-student residence’s location in downtown Montreal is within walking distance of Old Montreal, the Bell Centre sports and entertainment complex and numerous dining and cultural attractions.

The property will include a media lounge, fitness centre, library and a technology centre as well as number of common areas, including study lounges.

Ted Rollins, co-chair of the board and CEO of Campus Crest, said in a statement the company had been evaluating the Canadian market for a number of years, and viewed the Delta Hotel project as a prime opportunity to extend its reach north.

“Not only will this allow us to expand our operational footprint, but we will be entering one of Canada’s most prestigious academic cities with a rich cultural heritage and serving nearly 200,000 students,” Rollins said.

The company is converting the eight-storey, 140-suite hotel into student residences, which will include a fitness centre, student lounges, common kitchens and more. The hotel is within walking distance of McGill.

Nor is the trend confined to Montreal. In Windsor, the new Club Riverside student residence is the former Riverside Inn (shown in the image). The Hamilton-based Vrancor Group bought the hotel with London, Ont.-based Farhi Holdings Corporation for an unspecified price in May 2013, according to the Windsor Star.

The 19-floor, 207 room building is being marketed as the “ultimate off-campus housing in Windsor,” and includes a swimming pool among its amenities.