Suburbs or mini-urban centres in the GTA?

There’s more than 100 million square feet of Greater Toronto Area (GTA) office space outside of downtown, and more is being built. However, some still see the suburbs as a poor cousin to the gleaming new towers of the core. 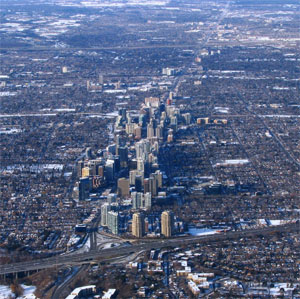 Whether that’s a fair assessment was a topic of discussion at the RealLeasing conference on Sept. 30, as five key players in the GTA commercial real estate sector analyzed the performance of the 905 area code office market.

“Until the end of the second quarter, the suburban markets were outleasing — from an absorption perspective — the urban markets,” said panel moderator Werner Dietl, executive vice-president and managing director of CBRE Limited’s Toronto West office.

“That has changed at the end of the third quarter and the urban markets have caught up to the suburbs, but there is activity in both of these markets.”

While the west has the most vacancies, it also has the most suburban construction. Just under a million square feet of office space has been built there annually since the first quarter of 2009 to the present, and that average has been exceeded since 2013.

First Gulf executive vice-president David Carreiro pointed out that despite the downtown condominium building boom, much more residential activity is taking place in the suburbs — especially in the west end — and supporting the office business.

“There is a very large suburban labour pool and it’s much easier for them to get to suburban buildings than it is to urban buildings,” said John Shields, who oversees a nine-million-square-foot portfolio in Ontario and Eastern Canada as vice-president of leasing for Dream Office REIT (D.UN-T).

“We’re seeing mini urban centres develop around Vaughan, the city centre in Mississauga, and Markham and the Highway 407 node. The increase in public transit within those suburban markets is making them intensify and we’re seeing infill development. Suburban construction over a 10-year time frame has well outpaced urban because there is demand still.”

Scott Watson, leasing and marketing partner for Crown Realty Partners and its portfolio of 5.3 million square feet of office space in the GTA, isn’t as gung ho on Vaughan as some seem to be.

“The challenge is that there’s only about two million square feet of space in Vaughan, which makes it really tough for anyone to locate there,” he said. “You’re seeing one office building going up that’s 300,000 square feet and will move the market a little bit, but I don’t think there’s going to be a flurry of activity in Vaughan.

“There are four or five major owners of space in Vaughan, and most of the stock is low-rise industrial. It’s going to take time to convert those into office towers and reposition them.”

Adam Lazier, a partner with Slate Asset Management L.P. in charge of acquisitions and dispositions, is bullish on Markham. He said investment in public transit along Highway 7 and immigration have made his company’s properties outperform expectations in the area.

“There’s a lot of demand for B-class product that we don’t necessarily have in the west, and it’s coming from the Asian business community. We have residential agents from Home Life bringing 10,000-square-foot tenants to our buildings and we’ll never see them again. They’re all good quality tenants who pay the rent every month.”

While a recent Colliers International Canada report indicated higher rents were realized at locations within walking distance of public transit stops, Watson said only 35 of 1,200 employees use a bus stop right in front of a 400,000-square-foot building it acquired earlier this year for $125 million.

He says the low usage means money spent on suburban transit infrastructure could be better prioritized.

Watson added companies are giving public transit access more attention than it may warrant just because it checks off a box on a list of things they can tell prospective employees they offer.

An exception to this, the panelists agreed, was GO Transit — especially once increased service running in both directions between the suburbs and downtown is established.

Providing more amenities — such as fitness centres, shuttle buses, common tenant meeting rooms and a variety of food options — is another way to attract tenants to suburban offices.

“Tenants don’t want to be in old B-class buildings,” said Lazier. “They want to be in retrofitted modern office facilities that have the amenities that A-class properties have downtown.”