Tale of two worlds at close of Real Capital Toronto

While real estate investors, particularly those heavily into REITs, may have taken it on the chin in 2013, it was a great time to be a real estate operator and developer, according to a panel of industry heavyweights speaking at the end of the Real Capital Forum in Toronto this week. 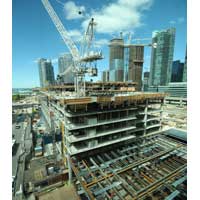 “These are the good old days, business is good,” said Blake Hutcheson, Oxford Properties Group Inc.’s president and CEO. “Our industrial book is working, our retail book has been performing, our office portfolio is 98.7% leased and the return on the business has been terrific.”

The real estate arm of the OMERs pension fund has been forced to become a major developer because it has become all but impossible to buy top quality institutional properties. The build ’em if you can’t buy ’em strategy means that Oxford is currently overseeing 16 projects comprising six million square feet and $5.5 billion. Most of that development is being done with partners, meaning the company’s outlay is $3.5 billion.

“We have an entire floor dedicated to the development business which I think is pretty unique in the world – I think Brookfield has that or more, but very few players can afford to have that talent.”

The development process, as well as divestitures means Oxford’s portfolio is getting younger. “We disposed of $1 billion (worth) of 44-year-old real estate on average and we are replacing that with 15 new buildings that are state of the art coming onstream . . . you are trading out older stock and replacing it with assets you could never buy.”

While pension fund-backed real estate companies have been leading the charge in terms of development, REITs have mostly been sitting on the sidelines. Judging by the stance of Michael Cooper, president and CEO of Dundee REIT  (D.UN-T) that is unlikely to change any time soon.

“In our public vehicles, we have been mostly focused on operating and I think the office business, we haven’t been very positive on development,” he said. “I have been surprised about how much development there has been.”

Cooper wears a number of hats at Dundee: he is also CEO of Dundee Realty Management Corp. and is the managing partner and founder of Dundee Real Estate Asset Management (Dream), according to Dundee REIT’s website.

Cooper’s companies have chosen to buy rather than build. “We have been acquiring a lot of properties all through downtown Toronto,” he said. Today its downtown Toronto portfolio of 5.4 million square feet is 97% full.

“I think the development risk within a REIT is not as much fun as maybe as it is in a pension fund in terms of total returns.”

Real estate giant Brookfield is taking more of a middle of the road approach with its cautious plans for development. “With the exception of London, we generally have legacy ownership” such as Bay Adelaide East in Toronto and the Brookfield Place project in Calgary, said  Kelly Marshall, managing partner, Brookfield Asset Management.

Brookfield also has a preference for emerging markets which he said offer “better risk-adjusted returns.”

For Brookfield, development “is something we will do, we like, but we never want to see it dominate our overall activities.”

While Brookfield is casting its gaze beyond the country’s borders, Dundee, with its Euro focus thanks to its heavy investment in Germany, is seeing an uptick in interest in Canada.

“The euro is over $1.50 and people like Canada again,” said Cooper. “Thirteen months ago, nobody was interested in Canada, it was overpriced and slow growth compared to the rest of the world.

“It has completely corrected and we are finding a lot of interest from people outside of Canada thinking that Canada will participate in the growth of the rest of the world.”

Cooper observed that what is driving absorption of office space in markets such as Toronto is that population continues to swell.

“There is great population growth within Canada and there are big changes to how people live. We are finding that our buildings have churches, fitness clubs, restaurants – they are whole communities, right in the downtown core.”

Dundee also experienced the downside of its REIT structure in 2013. “We had a tough year in our stock last year,” said Cooper. “It’s brutal. Again, the underlying business itself worked out pretty well.”

Oxford’s Hutcheson is confident that the four million-odd sq. ft. of new office space slated to open in Toronto over the next four years will be absorbed successfully but will have an impact on existing buildings.

“We don’t worry that much about our new product, where we worry is how much we cannibalize our own (existing) product and some of our competitors’ product. There is a zero sum game for at least a short period of time.”

The Oxford chief added that the new space coming on stream is in some of the healthiest markets in the world.

“If Toronto levels out at 10% (vacancy) it is probably not a bad natural state. It is better than most major cities in the world, for a period of time, because of new supply. I don’t think it is the end of the world. I do think there is a sucking sound . . . it does impact good A-quality buildings, there will be I think rent adjustments in the good quality-A buildings.”

Rather than operating fundamentals, the major focus at OMERS’ real estate arm revolves around managing accelerating expansion and growth. Money continues to flood into Oxford from the pension fund because real estate is producing the predictable returns the fund requires.

“My biggest issue is about how we take our business and double it in the next five years,” said Hutcheson. “That means are the right people on the team, are the right opportunities for those people being made available and how do we got underneath that sort of excessive growth?

“So the things I worry about are really about exponential growth, how we scale it, how we get up there, and how do you build the right culture, because I think all of us know there is a lot of math that matters but what matters most is coming to work every day and believing in the future of your business, working with decent people and having a heck of an opportunity. That is my major focus today.”