Tanger Factory Outlet Centers, Inc. and RioCan Real Estate Investment Trust are in major expansion mode in Ontario, with their Oct. 17 opening of Tanger Outlets Ottawa and the addition of 13,500 square metres (150,000 square feet) of retail space to Tanger Outlets Cookstown that will open on Nov. 7. 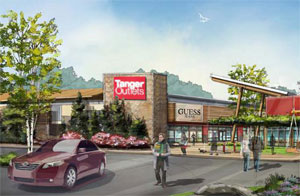 The mall is located off Highway 400 at Highway 89, 70 kilometres north of downtown Toronto and south of Barrie and northwest of Newmarket. A 47-metre (154-foot) water tower acts as an easily visible beacon for drivers to find the centre.

The $120-million, 26,370-square-metre (293,000-square-foot) Tanger Outlets Ottawa is located off Highway 417 at Palladium Drive in the suburb of Kanata. Its concept, design and merchandising are similar to those in Tanger’s portfolio of 42 outlet centres in the United States.

“This unique retail property will be a shopping destination for the Ottawa and surrounding market that we anticipate will satisfy the expectations of Canadians seeking a true outlet shopping experience,” said RioCan chief executive officer Edward Sonshine.

Sonshine said there was “overwhelmingly positive local response” to Tanger Outlets Ottawa’s opening, and there were reports of major traffic jams on Highway 417 as shoppers swarmed on the mall to see what it had to offer.

Tanger and RioCan entered a joint venture agreement in January 2011 for the acquisition, development and leasing of sites across Canada on a 50/50 basis. These properties are intended to become discount shopping malls in the image of Tanger Outlet Centers in the U.S. that cater to brand-name and designer manufacturers.

The two companies announced at the time that their intention was to develop as many as 10 to 15 outlet centres in larger urban markets and tourist areas across Canada over a five- to seven-year period. They anticipated that the overall investment of the joint venture could be as high as $1 billion.

Tanger and RioCan acquired the Cookstown property, which was built in 1995, for the aggregate purchase price of $62 million in December 2011.