When your main product is information, you definitely want to fall on the side of accuracy. But there is also something to be said for having exquisite timing. 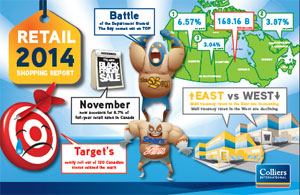 A good example of the latter occurred when Colliers released its spring 2014 Retail report, just a day after discounter Target announced the firing of its Canadian president, officially making him the fall guy for the lacklustre launch of the chain over the past year.

The Colliers consulting crew devote some digital ink to Target’s maple leaf follies (they do squeeze in the departure of U.S. CEO Greg Steinhafel that occurred earlier this month), but events of this week overtook them.

So just what kind of bad news is coming with the firing of Target Canuck president Tony Fisher and his replacement by Mark Schindele? None apparently, according to Colliers, sticking with the “it could have been a lot worse” school of analysis.

“Our interpretation of the changing of the Canadian Target head is that it reaffirms their long-term plans for this country,” said James Smerdon, Colliers’ vice-president and director of retail consulting in Vancouver.

“When the announcement came down about the dismissal or the resignation of the U.S. CEO in the beginning of May, I think there were a lot of questions being asked by landlords in this country as to whether that was softening up shareholders and the board for a major decision on Canada and an about face on their Canadian expansion plans,” he said.

“By making some major management positions in Canada, it just reaffirms that they are looking to make changes, right the ship and making a solid effort in all the markets in this country for the time being.”

The Colliers executive expects a heavy marketing push over the next year from Target to convince shoppers it is committed to Canada and is on its way to winning back the goodwill it squandered by its less-than-stellar debut north of the border.

He expects that effort to be coupled with a serious study of what is working in Canada – and what isn’t – with store closures, if any, coming in the new year. Smerdon, however, does not expect mass closures in the 124-store Canadian operation any time soon.

“The company is pretty opaque on specific-store performance. What we do know is the network across Canada of former Zellers stores certainly isn’t the network that they would have built if they had the choice from the get-go.”

Instead, they are working with a misfit cast of stores that includes two-level locations and outlets that are far smaller than their preferred footprint. In fact, it’s a problem Walmart encountered 20 years ago when it purchased Woolco’s store locations in a bid to upset the country’s discount king of the time, Zellers.

“There are stores in markets I think they wished they didn’t go into. There are just some markets that aren’t ‘Target markets.’ How many stores? If after a year of new Canadian leadership, if they pull out of more than say a dozen stores, I think that would be a serious black mark on the original expansion plans. If any, there will probably just be a handful of real under-performers that they let go.”

Avoiding the perception of failure might even prompt management to keep its laziest dogs on the leash, he added. “I think it would be more important for them to maintain a couple of dogs than to close any stores at all.”

Will others catch Target’s Canadian sniffles?

For Smerdon, Target’s “self-inflicted” stumbles in Canada have more to do with poor execution and unrealistic expectations than a cautionary tale for other foreign retailers eyeing real estate here.

Colliers has detected a slowdown in the pace of cross-border entrants into our market, but he attributes that more to the weakening Canadian currency than to any dissatisfaction with the country’s prospects as well as a “hollowing out” of middle market retailers illustrated by the trails of the likes of JC Penney and Macys.

The next battle of foreigners on Canadian soil will most assuredly feature better-dressed combatants as the likes of Nordstrom (and Nordstrom Rack) face off for upscale supremacy versus Saks (and Saks off Fifth) against incumbent Holt Renfrew.

Many would predict the venerable Hudson’s Bay Company chain to be roadkill from all the fighting as it is being squeezed at the top end by new upscale entrants, at the low end by the Walmart-Target combo and everywhere else by e-commerce. But Smerdon advised not to write off the retailer, which is a couple centuries older than the country itself.

“First, Hudson’s Bay will probably outlast us all. Second, Canadian metropolitan markets will support two to three major downtown, fashion-oriented department store brands. Third, in a decade or two, this may all change again.”

For landlords who like to worry, however, Target’s long-term future in Canada remains uncertain, as does that of Sears Canada.

“There are markets in many malls across the country that have both Target and Sears as anchor tenants right now,” he said. “They have got to be looking at strategic options for one of those tenants, going forward, possibly going dark.”