When it comes to attracting potential investors, New Brunswick, Prince Edward Island, Ontario and Saskatchewan’s business property tax rates may put them at a disadvantage.

At the civic level, investors might also think twice before deciding to inject capital into Montreal, Halifax, Charlottetown and St. John’s, according to a new report from the C.D. Howe Institute. The aforementioned provinces and cities have much higher tax burdens than previously believed.

“Business property taxes are a major part of the tax burden on new business investment that can tip the balance in competition for capital among Canadian cities and provinces,” C.D. Howe contends in its new report.

In What Gets Measured Gets Managed: The Economic Burden of Business Property Taxes, report authors Adam Found, Benjamin Dachis and Peter Tomlinson researched the impact of business property taxes in locations across Canada. 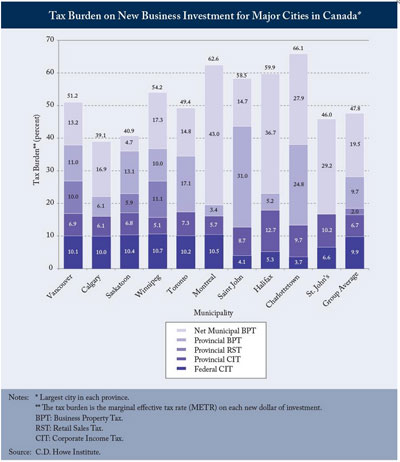 Found said in a release accompanying the report that before businesses invest in a location, they factor in the accompanying tax burden, something economists refer to as the marginal effective tax rate (METR).

“In this report, we show for the first time just how much property taxes drive up that rate in jurisdictions across Canada,” Found said. “At present, business property taxes aren’t included in government estimates of the total tax burden on new investment, but they should be.”

The report argues that governments should include provincial and net municipal business property taxes in their marginal effective tax rate estimates.

The institute maintains that if governments did so, they’d be more motivated to reduce business property taxes, therefore helping to encourage new investment.

For cities, the addition of the business property tax  in Montreal contributed 43 per cent, Halifax 36.7, St. John’s 29.2 and Charlottetown  27.9 per cent.

The report also decried the practice of provinces calling their business property taxes “education taxes.”  The authors write: “. . . no province allows provincial property tax revenue to determine spending on schools. The ‘education’ tax label is misleading to the public.”

The authors also call for a “time path” for tax rates for future years to help lower investor uncertainty. Currently, the practice in most provinces is to announce business property tax rates after the year has begun.

“It is time that governments include harmful business property taxes in their METR measures and begin cutting them to lower the true cost of investment,” the report concludes.