When most people think of Toronto’s TD Centre, it’s the six iconic office towers in the heart of the city’s financial district that first come to mind. 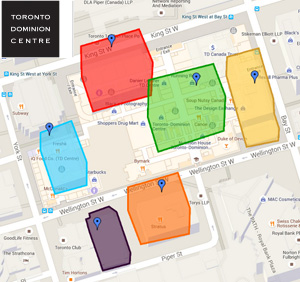 But it was the centre’s concourse — a labyrinth of shops, services and food options — that was responsible for its 19th place ranking on Retail Insider’s list of Canada’s most productive shopping centres with sales of $818 per square foot.

A pioneer in mixed-use development

“He wanted a place where people could work, live and play,” said TD Centre general manager David Hoffman. “He designed the TD Centre with an eye to the human element, so having amenities and services was important.

“That was new and innovative and forward-focused.”

There are 20,000 people working in TD Centre, where its 4.3 million square feet of rentable space is 97 per cent occupied, and 50,000 pass through the centre every day.

“Keeping these buildings full drives a lot of the retail,” said Hoffman. “If you have great amenities, that’s an attraction for office tenants. If you have a large group of office clients, that drives retail. One feeds the other.”

The retail occupancy rate is an equally impressive 96 per cent, which Hoffman projects will be up to 98 per cent in a year through the efforts of a dedicated retail leasing director and by utilizing the talent and resources of building owner Cadillac Fairview.

“We have a big pool of knowledge and experience at a national level within Cadillac Fairview, which is primarily a retail company, and we’re leveraging their best-in-class relationships that they have with a lot of clients,” said Hoffman. “We’re able to draw on our head office pool to bring in a lot of top-notch retailers to an office environment.”

“A lot of our new food offerings are moving toward healthier options,” said Hoffman. “That’s generally the way the market is going, but we’re also conscious as a landlord to try and give our tenants healthy choices.”

Visitors can choose whether they want fast food or fine dining. There are a variety of women’s, men’s and children’s apparel outlets as well as shoe stores, a toy shop, a florist, a cards and stationery seller, an electronics retailer and newsstands.

Other services include a post office, banking, dry cleaning, a travel agency, a chaplaincy, shoe repairs, clothing alterations and printing.

“It has everything you need as an office worker to do your work up in the towers, but you can also have that balanced with the human element of your daily life,” said Hoffman.

TD Centre attained its lofty ranking on Retail Insider’s list despite most tenants being open only from 10 a.m. to 6 p.m. Monday to Friday. With increased population and activity in the downtown core due to Toronto’s condominium boom, Hoffman said there’s been talk of extending weekday hours and opening on weekends, but nothing is imminent.