Tenants in Ottawa’s new office tower to have transformative influence

In Ottawa, where federal government cutbacks have pushed downtown office vacancy into the double digits, the city’s first new office tower in seven years was 90% leased on opening day. 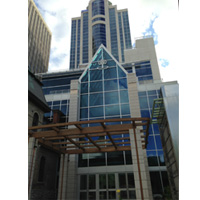 Not only are there leasing commitments to essentially fill Performance Court, it has also attracted the office tenants most coveted by Ottawa’s building owners of the past few years.

Co-owners of Performance Court, Morguard and  Healthcare of Ontario Pension Plan (HOOPP) officially welcomed its tenants to the building at a reception held in its atrium last Thursday evening.  The event featured speeches from the Mayor of Ottawa Jim Watson, Steve Taylor the CEO of Morguard and representing its lead tenant the  Canada Council for the Arts its Director and CEO Robert Sirman.

Not your average office building

Located at 150 Elgin Street, on the corner of Elgin and Gloucester Streets, Performance Court is 21-storey office building. It has 345,100 SF of leasable office space, 8,000 SF of retail at grade and 7,000 SF in a heritage property called The Grant House that was incorporated into the building during construction.  It has green roof named the Winter Garden that is open to both the tenants and the public.  It is striving for LEED Gold Core and Shell certification and the owners have engaged Bullfrog Power to supply renewable electricity to the building.

Performance Court will have one of the smallest carbon footprints of any multi-tenanted office tower in Canada according to Morguard.

“It’s not your average office building,” said Margaret Knowles who is the Senior Vice President of Development at Morguard responsible for managing the development of Performance Court and likely knows it better than anyone.  “We meticulously thought through every detail to build a landmark in Ottawa that will define sustainable commercial real estate development for years to come”

Performance Court flaunts significant environmental credentials and its nuevo art deco design with striking blue windows is unquestionably a welcome relief from the squat block Government buildings that dominate Ottawa’s downtown. However, its unusual vibe is arguably not due to the design but to its eclectic mix of tenants.

First to occupy the space is the Canada Council for the Arts whose influence on the building is indelible and evident as soon as you enter Performance Court.

The public spaces at 150 Elgin are adorned with art that “reflect the Council and Morguard’s pursuit of a cultural centre within a private sector building” it states in a company news release. A three-storey interactive digital wall, for which the Canada Council is commissioning original, innovative and interactive digital art, is installed in the three-story atrium.

On the ground floor there is also a 3,000 square foot art gallery that is to be home to curate exhibitions from the Canadian contemporary artwork collection maintained in the Canada Council Art Bank.

The gallery’s name, Âjagemô that means “crossroads” in Algonquin, was chosen to honour the building’s location on native land. The installation of a traditional birch bark canoe made by Algonquin artist Daniel (Pinock) Smith on permanent display at Performance Court was honoured at the welcoming party for the tenants.

A circular staircase that leads from the Âjagemô on the ground floor to the Council’s office on the second story adds architectural flare to what would otherwise be circulation space.

“The appeal was simple. Performance Court successfully embodies many of our core values,” said Robert Sirman, Director and CEO of the Canada Council for the Arts in a statement.

KPMG, whose logo now adorns the top most corner of the building, was the first tenant to sign a lease and one of the more traditional tenant of those in the building.  “With a full practice serving the Ottawa business community, we were looking for space to accommodate our recent and future growth,” said Grant McDonald, Office Managing Partner at KPMG. It will be the most sustainable KPMG office space in the country, achieving an important space requirement for the firm, he said in a news release.

Shopify is an e-commerce platform that enables individuals and businesses to create online stores and the most successful new venture in Ottawa.  It was the most sought after tenant in the city until it settled for Performance Court.  Currently located in the By-ward Market Shopify expects to move into its new digs in the fall bringing close to 480 young and hip IT workers to 150 Eligin.

“When looking for a new office space, we had many requirements. A few being that it had to be located downtown, align with Shopify’s culture, and be able to grow to three times our current employee count of 342 in a couple of years,” said Daniel Weinand, Co-founder and Chief Design & Culture Officer, Shopify.

The Grant House is a 140-year-old brick and stone home preserved during the construction of Performance Court. The home occupies the corner of the lot on which the office building sits and the heritage structure is incorporated into the interior of the three-storey office atrium.

Award-winning local restaurateur and sommelier, Stephen Beckta is opening a restaurant in the home.   “The Grant House offers an amazing heritage stage for our flagship restaurant, and signals our faith and commitment to world-class fine dining in Ottawa,” said Beckt in a news release.

Other tenants include CIBC World Markets, the New Zealand High Commission, Ottawa Tourism and a restaurant called The Scone Witch already up and running at street level by the Gloucester Street entrance.

Performance Court serves as the anchor building at the southern end of the ceremonial entrance to downtown Ottawa along Elgin St. providing a youthful lift to an otherwise staid part of the city.

South of the building on Elgin Street is one of the liveliest parts of Ottawa lined with small privately owned restaurants and clubs frequented by the University of Ottawa community and employees at nearby City Hall.  It is an area that stands to benefit from the purchasing power of the new tenants as well as the cultural shift that the arts and IT workers from 150 Elgin will bring to the community.

For the city as a whole, Performance Court serves as an example of how “if you build it right, they will come” and as one attendee at the opening event remarked it is “not just another Government building.”