Shopping centres in tertiary markets often have to work harder to attract national tenants, though those willing to put in the effort and make the commitment find it can pay off for both parties. 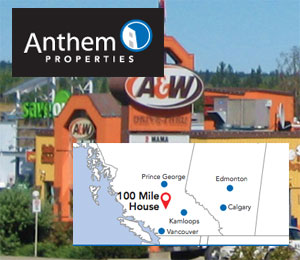 “In the old days, you would pay a lot less for a property in a tertiary market so the upside was much bigger,” said Bill Kennedy, executive vice-president of investments for Anthem Properties, a privately owned, 175-person real estate investment, development and management company that owns shopping centres in various Alberta and B.C. towns and cities.

“But well-placed and well-managed properties in these smaller markets can do very well for us. Part of that may be because a lot of typical institutional-type investors won’t go to these places.”

Landlords have to be more tenacious

Landlords have to be more tenacious and dig harder to draw attention to what small communities have to offer national tenants, and then to get them to check out these places in person, and Kennedy said Anthem team members are happy to go that extra mile.

“If big retailers are on an expansion program and are told they’ll need 50 new stores in Canada in the next 24 months, they’re going to focus on the low-hanging fruit first and will go to the five biggest cities in the country and try to get 90 per cent of their quota there. Then they’ll branch out from that.

“Just naturally, places like 100 Mile House might be third on their list, so sometimes things take longer. Our guys are pretty dogged and determined and persistent, and that pays off. Some things may take a little longer, but the results are good.”

Kennedy was speaking of one of Anthem’s recent tertiary market successes in 100 Mile House, a south-central B.C. town of about 2,000 that’s home to the company’s Coach House Square. The 69,051-square-foot outdoor shopping centre, which has 432 parking stalls and sits on a 7.2-acre property, was built in 1995 and purchased by Anthem in 1998.

After two years of moves, renovations and new retailers opening, Coach House Square is almost fully leased after filling major vacancies with a new BC Liquor Store and a new Bosley’s pet store.

Anchor tenant Save‐On‐Foods has signed another long-term lease, A&W will soon be renovated, Canadian 2‐for‐1 Pizza has been expanded and 100 Mile Chiropractic and Massage has been added to a centre that also includes a 13,000-square-foot Dollar Tree and Williams Lake & District Credit Union among its 13 tenants.

A 1,000-square-foot space on the north side of the property is all that needs to be filled, giving Coach House Square the highest occupancy rate it has had in the 10 years Kennedy has worked for Anthem.

“Anthem strongly believes in retail that has a food store, drug store, liquor store and good service providers for the local community,” said Kennedy. “I don’t think you need to worry about what kind of market it is, whether it’s big, small or medium-sized.

“Everybody has to eat, people want a bit of entertainment, and they want their toothbrushes, antacids and Aspirins no matter where they are.”

Exterior upgrades are being done for a number of existing Coach House Square tenants and work is continuing on expanded loading facilities, new facades and parking enhancements. These are expected to be finished by the spring.

“You can make things look nicer and they can be laid out well and parking can be simple, but it’s the tenants that provide the ultimate service,” said Kennedy. “If you have tenants that are good for the community, your centre will do well.

“It’s important to operate at a certain standard and it’s important to put your best foot forward visually if you can, but you can have the prettiest building in the world and if it doesn’t have the right tenants, it’s not going to do well.”

Enclosed shopping malls in tertiary markets also often act as community hubs where locals can get together, organizations can hold small events and charities can raise funds.

Kennedy cites Anthem’s Waneta Plaza in Trail, B.C. — which has a children’s playroom and a model railway and hosts a variety of functions — as a prime example of such a space along with Centre Village Mall in Lethbridge and Parks West Mall in Hinton, Alta.

Vancouver-based Anthem is focused on mixed-use projects in the lower B.C. mainland and Calgary and has no new retail projects planned in the near term. That’s not to say, however, that it wouldn’t consider a value-add redevelopment of a retail property in a small market if one presents itself.

“We like smaller centres, provided we can see opportunities there,” said Kennedy.

“One of the best gauges of demand in our business are the retail tenants, because they’re generally experts at figuring out consumer demand for their projects. We would do a lot of investigation with potential retailers before we would start a new project in any market.

“We’ve looked at a lot of opportunities over the last 10 years that I’ve been here. Some of them we’ve followed through with and others we haven’t. Sometimes it’s just timing.”