The Canadian commercial real estate sector by the numbers 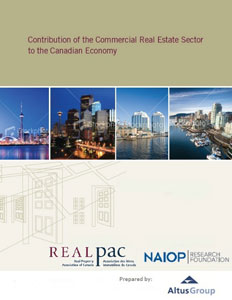 This article is the second part of a two part series.  Following is a link to the first article The ‘surprising’ contribution of CRE to the Canadian Economy .

This fall, Property Biz Canada delved into some of the really big numbers from the Real Property Association of Canada‘s (REALpac) recent study The Contribution of the Commercial Real Estate Sector to the Canadian Economy.

The top-line numbers are truly impressive. Commercial real estate generates $63.3 billion in annual economic activity and $32.4 billion in net contribution to the country’s GDP; attracts $21.6 billion worth of capital investment; and cranks out $12.5 billion in corporate profits for companies, pension funds and insurance companies.

The 76-page study is also a treasure trove of information that would likely surprise even the most plugged-in industry insider.

CRE by the numbers

Beyond the headline-grabbing CRE figures, the REALpac industry study provides some illuminating insights. Despite being viewed as a cyclical business, capital investment has been “relatively” stable. Capital investment in CRE sector buildings averaged about $21 billion per year during the turbulent 2007 to 2011 period.

Capital investment hit a peak of $22.5 billion on the eve of the financial crisis and recession, fell for two years and climbed back to $21.6 billion in 2011. While new construction has been a bit up and down in those five years, investment in renovation has changed little year to year.

Breaking investment out by property type, it becomes apparent not all CRE is created equal. Investment in both industrial and retail properties fell during the recession and recovery period of 2008-11. Not so for office properties. Capital investment (both renovation and new construction) continued an upward march over the five years, rising from $5.3 billion in 2007 to $8.1 billion in 2011.

Why was office real estate immune to the Great Recession? The report contends that longer lead times relative to industrial and retail meant it was more difficult to put office projects on “hold” than with other property types.

So just who benefits from all that CRE sector activity? The report looks at the economic spinoffs generated by the billions in construction activity and ongoing operations carried out every year and concludes that the $28.5 billion worth of activity each year grows to $63.3 billion generated on an annual basis after accounting for the activity of suppliers and spinoff impacts. To put that into context, the $63.3 billion generated by CRE-related activity in 2011 is more than double the entire economy of the province of Newfoundland & Labrador.

Overall, the commercial real estate sector generated $32.4 billion to Canada’s GDP in 2011. Directly, it contributed $13.7 billion and another $18.7 billion in the form of indirect economic contribution. The $32.4 billion contribution is greater than the GDP output of New Brunswick.

The commercial real estate industry is often overlooked as an engine of the Canadian economy (one of the reasons behind the creation of REALpac’s report) and also as a robust job creator. Overall, the sector created some 339,400 jobs in 2011.

Here’s how it breaks down:

The 340,000 who owe their jobs to the CRE sector is the equivalent of total employment in the entire Canadian agriculture industry.

All that employment created by commercial real estate generates a sizable slice of personal income and income for government in the form of taxes.

The report estimates that on average, an employee in the CRE sector earns more than $50,000 annually and the sector generated some $18.1 billion in personal income for Canadians in 2011.

By comparison, the $18.1 billion in personal income generated in the sector is more than twice the personal income of the Canadian agriculture, forestry, and fishing industries combined.

Economic activities from the CRE sector also generated $12.5 billion in profits for Canadian companies in 2011, ranging from small to large corporations. There is a healthy mix of small-, medium- and large-sized firms in the construction industry. However, many commercial building managers are large corporations owned by pension funds and major insurance companies. The profits generated in the CRE sector will flow back into these pension and insurance funds, benefiting millions of Canadians.

REALpac is an exclusive, executive organization whose vision is to be Canada’s most influential voice in the real property investment industry. Our mission is to bring together Canada’s real property investment leaders to collectively influence public policy, to educate government and the public, to ensure stable and beneficial real estate property and capital markets and to promote the performance of the Real Property sector in Canada. For more information please visit www.realpac.ca