The development boom in the Greater Golden Horseshoe is about to become the ‘raison d’etre’ for a research centre dedicated to studying the economic impact of growth to the region.

Ryerson University said in early December it is launching the Centre for Urban Research and Land Development.  The centre will be the first of its kind to study the consequence of urban policies in what has been called one of Canada’s fastest growing regions. 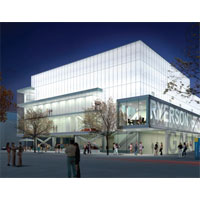 A lot at stake

“There are billions of dollars of spending at stake,” said Patrick O’Hanlon in a statement. “So it’s important to ask the right questions from the start.”

O’Hanlon is a financial supporter of the centre and president of Kylemore Communications, a custom homebuilding company in the Greater Toronto Area, and of Angus Glen Development Ltd.

O’Hanlon said the failure to take economic impacts into account could lead to flawed policies.

He’s teamed up with David Amborski, a professor in Ryerson’s School of Urban and Regional Planning and with real estate economist Frank Clayton to found the centre. (Ryerson Gallery and Research Centre shown in image)

Clayton said in a statement that up until now land use planners and architects have largely shaped urban policy in Canada and that they are typically people without a background in economics.

“At Ryerson, though, faculty and students look at real-world issues from all angles, including financial costs.”

Amborski noted the the region is facing all kinds of challenges, from urban sprawl to increased demand for better transit systems.

“So far there hasn’t been a research centre solely focused on examining the economic impacts of these challenges and providing recommendations and solutions to inform policymakers’ decisions. Our centre aims to fill that gap.”

The centre will be an expert-led, research-based organization that focuses on the role of market analysis in urban policy development, teaching and public education.

Donors from the Greater Toronto Area’s building industry have raised close to $2-million to date to develop the centre.

Ontario’s Greater Golden Horseshoe is at the western end of Lake Ontario and extends south to Lake Erie and north to Georgian Bay. The area encompasses the Greater Toronto Area, Hamilton, Barrie, and Kitchener-Waterloo, among other places.

The area is forecast to grow to 13.48 million people by 2041, according to environmental lawyer Dianne Saxe on her blog. She is citing statistics from the latest version of Ontario’s Greater Golden Horseshoe Plan.

Saxe writes that moving ahead the Greater Golden Horseshoe faces a number of challenges to sustaining and growing its economy. These include battling traffic congestion, which she says cause a delay in the movement of goods that costs Ontario upwards of $5-billion in gross domestic product annually.