The winners (and losers) of Slate-Huntingdon-FAM deal

While it has been mostly silence coming from the three sides involved in Slate Capital Corp.’s (SRT.UN-T) proposed $210-million acquisition of Huntington Capital Corp. and a sale of some Slate properties to FAM REIT (F.UN-T), analysts have not hesitated to let their feelings be known. 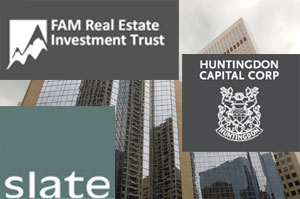 A trio of analysts who follow FAM see the deal as bad for the REIT, which will effectively be controlled by Slate should the deal be approved by FAM unitholders in an Oct. 15 meeting.  According to a report in the Financial Post, the three cite concern from the transfer of external management from Huntingdon Capital to Slate as part of the deal and a refocus of FAM from a diversified trust (industrial, office and retail) to one that will specialize in office properties going forward.

“I think Slate is buying Huntingdon to get access to FAM and it is going to be their exit vehicle of choice for their office properties,” said Rob Sutherland, vice-president and real estate equity research analyst with Euro Pacific Canada in Toronto.

All office, all the time

The centrepiece of the three-way deal is the sale by Slate of seven of its GTA office properties to FAM for $190 million. FAM will pay for the purchase by issuing about 5.1 million units and in the end Slate will have effective control of the REIT with a stake of approximately 48%.

Over time, FAM would sell its non-office sector properties, including its 11 industrial properties of about 770,000 square feet and its three-property, 95,000-sq.-ft. retail portfolio.

“I don’t love going to class-B office, especially GTA class-B office right now,” said the analyst. “I think it is probably a little bit overpriced and this isn’t quite the time to be buying it and certainly not these assets. Getting rid of their huge industrial portfolio and their smaller retail portfolio right now is not the best thing to be doing.”

Sutherland also noted that acquiring Huntington’s 30 per cent stake and the new FAM units will give it 48% control of the REIT but it is not paying any takeover premium in the deal, something with which he disagrees.

“They are putting on a lot of debt, it is going to be a low 70s (loan-to-value ratio), so high, high leverage and the rest of the purchase price is coming through issuing units to Slate,” he said.

“They are not really paying enough for the control that they are getting, so it is not a great deal on that side.”

He also takes issue with the philosophical change FAM would undergo from its current model of low leverage and solid payout ratio.

“They were just run like a large REIT and I think investors loved management because of that,” Sutherland said. “All of a sudden when you do this deal, their (debt) goes way up, they become a single entity, just pure office.

“Their risk goes way up because they don’t have the diversity anymore and all of a sudden they look like a lot of other things.”

The best-case scenario for FAM going forward would be to become a version of the Whiterock REIT which was acquired by Dundee REIT (D.UN-T) in 2012, he added.

Sutherland, in an Aug. 13 note to investors, pointed out that the Slate properties are not listed beyond stating they represent about 1.073 million sq. ft. and are currently about 91% occupied, but that he believed it is not difficult to determine which ones would be passed over to FAM.

“. . . doing basic analysis of building GLA and current vacancy rates, we believe that the vast majority of the properties are the Slate Properties’ buildings in the West End of the GTA.”

* Centennial Centre, 5395-5409 Eglinton Ave W, “a collection of brick, townhome style small tenant buildings, located across the street from the extremely poor performing Airport Corporate Centre, are in a particularly isolated position, and currently have a ~12% vacancy rate.”
* Woodbine & Steeles Corporate Centre, 7030-7100 Woodbine Ave, “a 237,000-sq.-ft. building with currently ~14% vacancy.”
* 135 Queen’s Plate Drive, “a 90,000-sq.-ft. building, poorly located with chronic vacancy issues and currently 26% vacant.”
* 1 Eva Road, “a ~90,000-sq.-ft building located off the 427 Highway and always in competition with much larger, newer and higher visibility properties, currently with 16% vacancy and no tenants over 7,000 sq. ft.”

“While there are some moderately attractive properties that would be a good fit with the current FAM portfolio, notably 2285 & 2599 Speakman Dr., near the REIT’s Promontory complex in Mississauga,” said Sutherland, “having extensively and thoroughly reviewed all of these buildings personally and on multiple occasions, we would have questioned the acquisition of any one of these properties at the described cap rate, let alone a portfolio of them.”

A possible opinion changer for the analyst would be the inclusion of some of Slate’s St. Clair Ave., Bloor St. or University Ave. properties: “at the same going-in cap rates, we would potentially look at this facet of the deal in a different light.”

(Before Sutherland got into the finance game, he ran his own real estate research company so he has been through all of Slate’s buildings a number of times, he said.)

Also unclear is the fate of FAM’s data centre development, which the analyst calls “one of the key drivers for the REIT.”

In April, the REIT said it had financing for a $53-million, fully pre-leased 64,000-sq.-ft. data centre development in Winnipeg to be called the EPIC Data Centre.

Slated for completion in May, it is 100% leased for a 15-year term to Manitoba Telecom Services Inc.

“We believe with MTS publicly stating that it has already pre-leased more than 50% of its space almost a year before construction completion there is the high likelihood that MTS, FAM and its JV partner would commence construction of Phase II of the site, further enhancing unitholder value,” the analyst noted in his report last month.

A trickle of news

This week, Huntingdon released its proxy circular related to the Slate acquisition. It does not reveal what assets Slate would be selling, wait for the FAM circular for that. The juicy bits?

Huntingdon will not attempt to re-amend the FAM management agreement without written consent by Slate.

“The amended agreement that was approved by FAM’s independent trustees gave significant concessions to Slate while received no concessions back (in fact it became more onerous on the REIT),” noted Sutherland. “Unitholders of FAM, if they vote down the transaction, may have little recourse to put things back the way they were without a fight.”

The other news out of the circular was that Huntingdon opened a window on the bidding process that had been going on for a number of months. Two of the five potential bidders (all Canadian) were interested only in FAM REIT rather than both FAM and Huntingdon, Sutherland observed.

In the end, it came down to two bidders and after review Huntingdon’s directors decided Slate’s offer provided the best value to shareholders.

Ultimately, however, it will be FAM REIT’s unitholders who will decide whether the Slate deal lives or dies.