Timbercreek Asset Management is getting into the longer-term fixed income fund market with the hiring of industry veteran Audrey Howe (shown in image below). 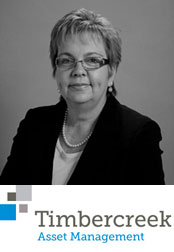 Andrew Jones, managing director of debt investments at Timbercreek, said the latest initiative from the Toronto-based real estate company is geared toward smaller pension funds and other institutional investors that want the stability of a long-term debt platform but don’t have the resources to create one themselves.

“We have had some conversations with (fund) managers where they need to match long-term liabilities and it is not easy for them,” he said. “They are looking at it saying, if I need a 12-year investment, they don’t have a lot of choices other than treasuries.”

Jones envisions the creation of a “very, very high quality mortgage pool” lending first-mortgage loans to rated real estate investment trusts. “You in theory have a very safe investment and if they can pick up 100 to 150 basis points over the treasury yield by investing in this fund over Canada’s, they will allocate some money for it.”

Made to order vs DIY

The country’s big pension funds for the most part have already created an in-house platform designed to invest in long-term mortgage debt. Those funds are not Timbercreek’s target. Rather, it is going after smaller funds that know what they need but don’t have the resources to throw at it.

“Where this will work well is with the smaller pension funds where they only want to invest $10 million or $30 million or slightly more and you just can’t afford to build a platform if that is all you are doing,” he said.

Timbercreek currently manages close to $1 billion in shorter-duration mortgage loan funds. “We have the infrastructure to source and manage the loans, that is not the problem. We have a pretty sizable team, we have all the processes in place. This is really adding a product.”

Jones predicts the new long-term commercial mortgage platform could swell to a size larger than its current roster of shorter-term mortgage funds. “It could be very large and I think larger would be better in this instance because institutional loans tend to be larger – you get more diversification.

“This is a project that you wouldn’t start without $100 million, $250 million and likely get into the billions,” he said. “We are confident that we can raise it.”

The hiring of Howe is the linchpin of the new venture. A 30-year veteran of the Canadian fund management and financial services industry, she was most recently president and a director of private fund management company ACM Advisors Ltd.

Before that, she was a founder and managing director of TerraCan Capital, a private real estate venture company where she structured real estate syndications, joint ventures as well as senior and junior participating mortgages. Prior to TerraCan, she was a vice-president of the corporate real estate group for Citibank Canada.

“She has had a lot of experience in that type of investment and so she is pretty confident, as we are, that the appetite is out there,” said Jones.

Howe echoed that sentiment in Timbercreek’s press release, outlining its plans to enter into the long-term debt market and compete with the likes of Great West Life and Phillips, Hager & North.

“We anticipate increased interest in quantifiable-outcome investments such as these, as investors seek effective long-term strategies to meet future cash-flow needs. As Canadian pensions continue to re-evaluate their exposure to different asset allocations, Timbercreek’s new platform will deliver against increased interest in alternative long-term de-risking solutions.”

Timbercreek does not have any other major initiatives in the works, but Jones said it is currently exploring a number of possibilities.

“We’re looking at new ways to grow. The real estate business is not the bargain it used to be. It is making it tougher to buy properties and in the high yield debt business I think we are as big as we want to be. We are looking at complimentary products and I think this is a good one.”

Future opportunities could include offering mortgage debt outside the country’s borders such as in the U.S. or U.K. and expanding into different asset classes in Canada.

“We are looking, it is just that nothing is imminent.”