Oxford Properties Group’s 111 Richmond Street West was designated a Heritage Building by the Ontario Heritage Act in 2000 because of its historically significant architecture and design by Peter Dickinson. 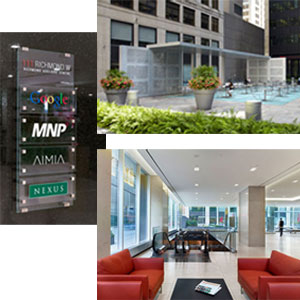 Now it has been awarded The Outstanding Building of the Year (TOBY) Award for historic buildings by the Building Owners and Managers Association of Canada (BOMA).

“Oxford’s been successful in renovating this building and modernizing the infrastructure, yet retaining the original appearance of the exterior and also maintaining the original lobby, entranceway and elevators,” said Oxford general manager Angelo Potkidis.

“For a 60-year-old building of this size, it certainly would have been easier to demolish it and build from scratch. As a result of the work that Oxford did, we were successful in being able to retain some pretty high-profile tenants, namely Google, MNP and Aimia. Those are three of the largest tenants.”

The 16-storey building is part of downtown Toronto’s Richmond-Adelaide Centre. It has 211,638 square feet of office space, 10,770 square feet of retail space and one level of parking below grade. It has direct access to the underground pedestrian PATH network that leads to the subway system and a variety of shops and amenities.

A redevelopment completed in 2012 included: installation of new double-glazed windows that maintain the pattern, colour and profile of the originals; the cleaning and repair of exterior limestone cladding and the exterior entrance canopy; and the restoration of the lobby, which had been dramatically altered in the 1980s, to its original condition.

The building is heated by an Enwave steam system automatically controlled and sequenced based on the outside air temperature. It’s cooled by Enwave’s deep lake water cooling system, which was installed in 2006.

Management personnel have annual business plans that are tied to performance targets for the building. To help employees enhance their skills, improve their performance and advance their careers, Oxford reimburses them for successfully attending courses and seminars related to their current job or proposed career path.

“We encourage participation from all of our tenants to not only find out what Oxford is doing on a larger scope but what they’re doing in their own spaces to encourage green building and energy efficiency,” said Oxford assistant property manager Megan Reid.

“We have a huge recycling program where we encourage waste diversion.”

The building participates in the Fatal Light Awareness Program. Through building automation and tenant awareness, 111 Richmond Street West has been able to reduce the number of lights on after working hours and become less of a threat to birds that use the moon and stars to navigate their migration routes in the spring.

Building customers were surveyed in May 2014 and 111 Richmond Street West scored a 100 per cent overall satisfaction rate while 99 per cent of those surveyed said they would recommend to their employer that they stay there.

Temperature management and increasing the frequency of daytime washroom checks were at the top of the list of services to be improved, and they were addressed in an action plan communicated to customers.

“We always make a point of engaging with our customers and talking to them about various subjects, sustainability being one of them,” said Potkidis. “We also meet with them proactively on a formal basis at least twice a year minimum to talk about how business is going, how we’re performing for them, if there are new things that we can do for them, and if they have new expectations that we can work towards fulfilling for them.”