Mississauga’s 2233 Argentia Road received The Outstanding Building of the Year (TOBY) Award in the 100,000-249,999 square feet category at BOMEX 2014, a tribute to its physical characteristics and the people who work there. 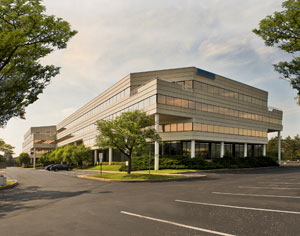 The four-storey, class-B office building, which has a total leasable area of 176,226 square feet, is managed by Crown Property Management Inc. (CPMI) on behalf of owner LaSalle Investment Management.

Intertek, Ryder and PHH Canada Inc. are the biggest existing tenants. While Crossmark is moving out at the end of December, auto financing company NextGear Capital and a soon to be named “major brand name” company are signing on to take about 10,000 square feet each. That leaves approximately 25,000 square feet of unleased space in which Colliers International Toronto West senior sales representative Chris Burans said there’s plenty of interest.

“We’re asking and getting $15 net for the first few years, with escalations up to around the $17 mark on 10-year deals,” Burans said.

Its location west of the intersection of Argentia and Mississauga Roads in the business node of Meadowvale allows easy access to the 401, 403 and 407 highways. Three different MiWay buses service the building via a transit stop in front and it’s not far from the Meadowvale GO Transit railway station. Corporate neighbours include Walmart, Amazon and Bank of Montreal, and the property is within walking distance of restaurants, retail outlets and several walking paths.

The building was constructed in 1981 and its second and third floors are divided and serviced by one set of elevators each, creating east and west “towers.” The basement, first and fourth levels are continuous floors serviced by both sets of elevators. Floor plates of up to 40,000 square feet enable flexible and efficient office planning.

Suites include plenty of natural light, private offices, an open area, kitchen, boardroom and new carpet throughout. There’s ample storage space in the basement and lots of free above-ground parking, with a ratio of up to five cars per 1,000 square feet of space.

“One of the things that makes this building unique are the green initiatives we have put in place, like reserved green parking spots, recycling and energy conservation programs, and more,” said CPMI marketing and sustainability manager Monica Di Zio.

The building is LEED Gold and BOMA BESt Level 3-certified and its efficiency is further proven through its 92 per cent Energy Star rating, well above the 75 per cent target. It also produces less CO2 emissions than national benchmarks.

CPMI staff members are onsite and, along with tenants, they’ve participated in the “Adopt a Park” program of quarterly clean-ups of the adjacent Mullet Creek Park for the past three years.

Remarkable commitment to the community

Management, ownership and tenants are as dedicated to the local community as they are to the environmental initiatives and energy savings. Local blood drives are promoted at annual tenant appreciation barbecues, while ongoing special events help raise thousands of dollars for local charities, including the Juvenile Diabetes Research Foundation, Giving Tree Program and United Way. CPMI joined forces with the Community Foundation of Mississauga this year to support its programs and services that help build a more vital and caring city.

CPMI annually sponsors and employs summer students and it’s involved in the “Take Your Kids to Work Day” program organized by The Learning Partnership as well as an innovative local initiative.

“Contract employees are hired on an as-needed basis, supporting the Peel Multicultural Council’s ELT Co-op Program, which is a 14- and 16-week program designed to give individuals the tools needed to enter the Canadian job market,” said building property manager Janbee Monsod.