Toronto’s Cadillac Fairview Tower received The Outstanding Building of the Year (TOBY) Award in the 500,000 to one million square feet category at BOMEX 2014, adding to the list of accolades the flagship commercial office tower of the Eaton Centre has received since it was constructed in 1981. 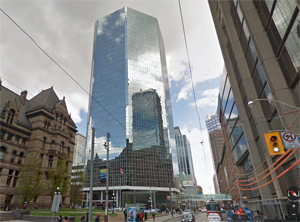 The fully leased and recently renovated AAA Class structure occupies 60,886 square metres (676,509 square feet) of space over 36 storeys at 20 Queen St. W. and employs more than 2,000 people at 24 businesses — accounting for 16 per cent of the working age population in the neighbourhood.

While these numbers are impressive, other less measurable factors contribute to the positive reputation of the building that houses the headquarters of Cadillac Fairview Corporation Limited — one of North America’s largest investors, owners and managers of regional shopping centres and office properties.

“We believe that our building’s community spans beyond our footprint,” says general manager of office properties Chris Crozier. “We directly participate in social events and charitable work, including providing our employees with a paid volunteer day.

Promoting goodwill in the community

“Community organizations rely on corporate philanthropy to offset the high rent of real estate in the downtown core, which is often a crucial location for providing their services. We have promoted goodwill within the community by donating in-kind space to a number of organizations over the years.”

The building’s grey-banded aluminum façade and soft grey reflective glass designed by B+H Architects (then known as Bregman +Hamann Architects) and Zeidler Partnership Architects (Zeidler Roberts Partnership Architects) combine to form a classic example of contemporary modern architecture set in one of Toronto’s most convenient locations: on the doorstep of the financial core and surrounded by a wide array of amenities and services.

The subway can be accessed via a connection to the PATH system and the Toronto Eaton Centre and its 200-plus retailers, 23 fast food outlets and nine restaurants.

“Our proximity to the Trinity Square Parkette provides building occupants with a comfortable and open outdoor space to enjoy their break, lunch, or to assign as a meeting point,” says Crozier.

Three zipcars and two Bike Share Toronto service locations outside the building are available to provide transportation for tenants and visitors in need of a temporary ride, while the building offers a free parking facility for 60 bicycles and has a car parking ratio of one covered stall per 315 square metres (3,500 square feet) of leased space that’s the envy of many downtown properties.

Cadillac Fairview, which is wholly owned by the Ontario Teachers’ Pension Plan, also manages its flagship building at 20 Queen St. W.  Management prides itself on its communication philosophy, which is based on a bilateral dialogue, to try to ensure tenant satisfaction.

“Our goal is to respond within one hour and complete the request within 24 hours or provide an estimated date and time of completion,” Crozier says of work requests by tenants, adding that “96.2 per cent of our service requests are responded to by the target time.”

Energy conservation is a priority, and significant savings have been realized through reduction programs and tenant education, including a campaign to focus on switching off computers and monitors during non-business hours or lunch and reduce the use of lighting. Such measures have resulted in utility consumption reductions from 2010-11 to 2013-14 of 41.5 per cent for steam, 4.3 per cent for hydro and 11.8 per cent for water.

Its consumption levels are below the average benchmark for offices certified in the BOMA BESt program in 2013.