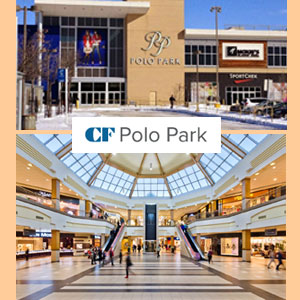 The award marks the shopping centre’s latest step in its ongoing revitalization.

“I’ve been here for 15 years and when I got here we were not the best shopping centre in the city,” said CF Polo Park general manager Deborah Green. “I’m not saying it was all me, but timing, the retail landscape and Cadillac Fairview writing a couple of nice cheques for development has pulled everything together.”

CF Polo Park was constructed in 1959 as an open-air mall. It was expanded in 1963, 1968 and 1986, when it was enclosed and a second level was added. It was renovated in 2008 and went through a redevelopment in 2010. A $49-million redesign of a former Zellers department store was completed last year.

The most recent renewal encompassed: renovations of 114,000 square feet of space for several new and existing retailers; the revitalization of the second-level parking deck entrance; construction of a new common-area washroom; and the installation of 370 square feet of new skylights.

CF Polo Park is now the 13th largest enclosed shopping centre in Canada and also ranked 13th in sales per square foot among Canadian malls in 2014, according to Retail Insider. It attracts 10.3 million visitors a year to more than 200 shops and services, including 32 Winnipeg stores exclusive to CF Polo Park.

CF Polo Park is committed to the community and often takes centre stage as host to charity events for local and global causes.

“The new tag line that we’re using as a company, ‘Where it all comes together,’ really describes the overall impact that we have in the community,” said Green. “Between our community booths and our events, we support more than 100 charities throughout the year and have probably raised more than $250,000 and helped create awareness.”

The mall holds a large job fair to attract candidates to work in its stores and works with an organization that helps them create resumes and apply for jobs. It sends monthly newsletters to its retailers and uses its social media and online channels to promote them. It also lets retailers hold regional meetings in its boardroom for no charge.

“We’ve tried to establish close working relationships with all of our retailers through fun events, information sharing and setting up tenant meetings,” said Green.

“We’re partners in their businesses. If they’re successful, we are. If we have a good environment, that sets them up for success and to do well at Polo Park.”

CF Polo Park practises energy management by continuously monitoring utility use, employing innovative technologies and pursuing efficiency rebate programs. It became the first shopping centre in Manitoba to certify under BOMA’s Go Green program in 2008 and in 2014 it re-certified at Level 3 under the BOMA BEST program.

“Manitoba Hydro has been very generous and works very closely with us because it knows that we’ll take advantage of any savings and will implement longer-term energy-saving projects,” said Green.

Another audit completed this year by environmental consultant CD Sonter Ltd., CF Polo Park’s TOBY project manager, revealed the mall diverted 44.6 per cent of waste from landfills and captured 66.2 per cent of recyclables through waste maintenance and recycling programs.