Vancouver is forging ahead to secure its reputation as one of the greenest cities in the world – and a strong surge in transit-oriented development is leading the way.

Known as Marine Gateway, the transit-oriented hub on the Cambie Corridor will feature a 14-storey office tower, an 11-screen movie theatre and a 46,000-square-foot grocery store. 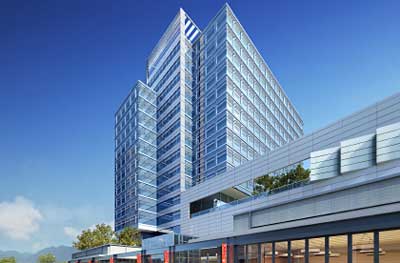 The development, which will be built to a Gold LEED standard, is near a major transit hub and bike routes. Marine Gateway is expected to generate two million transit trips annually.

Marine Gateway is located nine minutes from the International Airport, and 16 minutes from the central business district via the Canada Line, which tenants can access through a covered connection.

The development is on a high-volume bus loop with frequent 20-minute connections to the 22nd Street SkyTrain Station in New Westminster.

Interest in similar transit-oriented developments in Vancouver is high, with a number of similar projects proposed.

PCI is pre-leasing a proposed development adjacent to the King George Station. That project potentially includes more than 425,000 square feet of office space, as well as 300,000 sq. ft. of retail and 700,000 sq. ft. of residential.

Shape Properties’ Brentwood Town Centre could feature as many as six residential buildings and a 25-storey office tower.

The Brewery District by Wesgroup Properties in New Westminster has already pre-leased a substantial amount of the 256,000 sq. ft. office space of its eight-tower development to Translink.

Surrey City Development Corporation is partnering with Century Group and Cotter Architects on a 50-storey mixed-use tower next to Surrey Central SkyTrain Station.

Approved in 2011, Vancouver’s Greenest City 2020 Action Plan is a document guiding the city’s growth and sets out a road map to turn the West Coast centre into the world’s greenest city.

A section of the plan covers green building and the stated goal is to “lead the world in green building design and construction.” As of July 2010, all building rezonings within the city are required to meet gold LEED standards for environmental performance.

The city also outlined two targets in the area of green transportation: to make the majority of trips by foot, bicycle and public transit; and to reduce the average distance driven per resident by 20 per cent from 2007 levels.

To help reach its goal of green transportation, the plan calls for, among other things, new development that supports existing and new transit infrastructure. It appears  developers are taking the plan to heart.