Ivanhoe Cambridge, Brookfield Office Properties and Canada Pension Plan Investment Board (CPPIB), which has been on a buying spree of late, each made announcements on Thursday about completing significant real estate transactions in Manhattan. 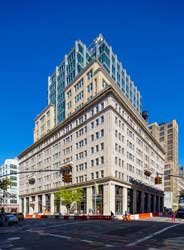 The strategic decisions of these companies to pursue development of U.S. building portfolios with a focus on New York once again demonstrates the deep connections held by the Canadian property industry’s in this important U.S. market.

Thursday morning,  Ivanhoe Cambridge announced the acquisition of a 49% interest in 330 Hudson in Manhattan for US$150-million with its U.S. partner Callahan Capital Properties.   The purchase was completed through a joint venture with affiliates of Beacon Capital Partners.

Callahan Capital Properties and Beacon Capital Partners both have historical ties to Equity Office Properties Trust the company formed by Sam Zell before it was sold in 2007 to Brookfield and Blackstone.

330 Hudson is located in the trendy Hudson Square neighbourhood of midtown south which is described as an exciting live-work-play neighbourhood on Manhattan’s west side.  It is a 16-storey, 467,000 ft2 Class-A office building that has been redeveloped into a ‘brick and beam’ style sought after by the technology and media companies that occupy space in the area and represent the prospective tenant group.

“I thank our joint teams, who have used their exceptional expertise in executing this transaction and we hope to capitalize on more opportunities in key U.S. markets soon,” Adam Adamakakis, Executive Vice President, U.S. Investments, Ivanhoé Cambridge said in the news release.

Brookfield Office Properties Inc. announced, also on thursday morning, that it has signed a 20-year lease with BNY Mellon for approximately 350,000 square feet in Brookfield Place in Lower Manhattan.

Brookfield Place is an eight-million-square-foot complex with five office towers buildings located within Battery Park City where BNY Mellon was already located.  This lease was on two floors of 225 Liberty bringing the complex to near a 90% occupancy level according to Brookfield’s statement.

BNY Mellon is a global investments company providing services in in 35 countries and more than 100 markets.  “BNY Mellon is a highly valued institution with a 200-year history in New York and we are pleased to add them to the list of prestigious tenants at Brookfield Place,” said Dennis Friedrich, chief executive officer of Brookfield Office Properties in their announcement.

Canada Pension Plan Investment Board (CPPIB) announced, also on thursday, that it has bumped up its investment in One Park Avenue by US$108 million to 45% from 11% through a joint venture with Vorando Realty Trust who will continue to manage the property.

One Park Avenue is 20-storey, 941,000 square foot Class A office building valued at US$560 million, including the assumption of US$250 million of debt according to the news release.

In the past month CPPIB has made several announcements regarding property transactions that are easily found by searching on RENX.ca.