Toews back in the development game at Calgary’s Strategic Group

Ken Toews is back for another round at integrated real estate company Strategic Group as its newly minted vice-president of development.

Toews was VP of development and construction at the Calgary-based company from 2004-07, leaving the company after the recession knocked the legs out from under new development in Alberta. Since then he was president of Urban Development Advisors Inc. and, most recently, was director of development for GWL Realty Advisors. 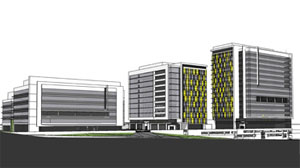 He brings more than 15 years of expertise in mixed-use development, including retail, office, hotel, residential and land development to the job and has worked on a number of redevelopment projects in Calgary, including Garrison Woods and Currie Barracks. He is also an instructor of mixed use development at the University of Calgary.

The hiring, or re-hiring, of Toews signals a change of focus at Strategic.

“Over the last years, they have been focused on acquisitions of existing property, but now they really want to beef up their development of new opportunities and also redevelopment and improvements on existing sites,” said Toews.

“The great thing about developing new is you get state-of-the-art assets rather than buying something that may be five to 10 years old. It is amazing how the technology and the strategies change, even in a few years,” he said, noting the advances in environmental sustainability now commonplace in the latest designs.

Toews, however, is focused on providing best-in-class amenities for tenants of Strategic Group’s future office and multi-res developments. “Who really pays our bills are the tenants, whether it is a residential tenant, commercial office tenant or a retailer. One thing the industry really hasn’t done a good job of is looking at the tenants and determining not only what they need, but what they would like to have if they could have it.”

That means more and better on-site amenities. He noted commercial tenants’ biggest expense is typically employee salaries and creating soulless, cheerless office towers in the suburbs is a recipe for higher-than-average staff turnover.

“In the Calgary market, it is so tough to attract people, and also retain people,” he said. “One of the ways that can be done is by having office facilities that are convenient for their employees. So we try to locate new facilities close by LRT stations and the proper amenities.

“You look at what Google and some of those (technology) companies have done for employee amenities; they are pretty impressive, but it is a pretty good strategy for them. They are able to attract and retain the best and the brightest.”

Adding Google-like amenities such as gyms, daycares and social spaces to office properties will take some education, Toews acknowledged. “I think that companies that try to save money on their office costs are probably short-sighted.”

Strategic Group is currently seeking development permits for its 800,000-square-foot Heritage Station office project located directly across from the Heritage LRT station, consisting of three buildings and a total of 32 storeys. Plans have been recently submitted to the city and the developer plans to start a consultation process with neighbourhood groups.

Phase  I would consist of a 371,120-sq.-ft., 16-storey commercial office power centre, with retail based amenities to service the direct demand of the office users, followed by an additional 231,145-sq.-ft. office space  and phase III, a 224,005-sq.-ft., two-tower commercial office centre with at-grade customer parking, including all the benefits of Phase I and II.

The project is located adjacent to the newly built London at Heritage Station complex, surrounded by existing shopping destinations and “unrivalled views of the Canadian Rocky Mountains.”

Proximity to the LRT is key, however.

“We love the idea that it is by the LRT. The land was purchased quite a few years ago with that in mind. Getting people to work is very important. I found it really strange that Imperial Oil went to a suburban location that won’t have an LRT station there for maybe 20 years,” Toews said.

“I think they are making a mistake there. If companies really want to retain employees they are going to have to really look at locating near those LRT stations, I think it is essential.”

“We want land that is close to those important drivers. We want to be close to grocery stores. People go there one, two, three times a week. Close in an urban setting is three or four blocks away.”

The company is currently working on the acquisition of land for a high-rise residential tower in Calgary and has also acquired additional lands to accommodate a complex of three high-rise towers. “They are both right close to the downtown core,” he said.

Strategic Group, a fully integrated property owner, manager and developer of real estate as well as an investment company has more than $1 billion in assets and more than 300 employees.