Plenty of room for REIT IPOs in Canada, says panel

Despite the flurry of new public offerings of REITs in Canada in 2013, the market is far from saturated, a panel of real estate players told attendees of the RealREIT forum in Toronto last month.

Stephen Sender, managing director of Real Estate Global Investment Banking for Scotiabank and the panel’s moderator, set the tone for the conversation by dismissing criticism there has been too much activity in the REIT space in terms of IPOs, quality and structure.

“I would offer the contrary view that we need to have as many IPOs as we possibly can,” he said.

John Morrison, president and CEO of Loblaw Companies Ltd.‘s newly launched Choice Properties REIT, noted that while the pace of public offerings picked up over the past year, the reasons for going public have varied and the overall market has plenty of potential growth. (Choice Properties’ locations shown on map taken from its website).

“I would describe the REIT market in Canada as still being relatively small, certainly compared with the U.S. The U.S. is much more specialized . . .” 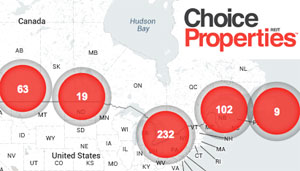 Dennis Mitchell, executive vice-president and chief investment officer of Sentry Investments, echoed the Choice Properties CEO’s viewpoint. “It comes down to what are you creating, what are you bringing to the universe that I can’t get elsewhere?”

Mitchell cited the example of SmartCentres head Mitch Goldhar, who launched his Walmart-associated real estate empire by examining the U.S. market with an eye to introducing a successful format on this side of the border.

“I think that is so easy to do. There are sectors in the United States that would work here (such as storage and data centre REITs),”  he said.

The landscape is changing

While Canada’s REIT market may be a bit behind the far larger U.S. market, it has seen plenty of recent innovation. That includes REITs created in Canada to invest in Europe and the U.S., at least one European REIT established in Canada and the growing number of U.S. outfits going public in Canada.

Scott Frederiksen is CEO of WPT Industrial REIT, which is representative of the latter group: a U.S. organization that came north to list because it was “too small” to attract the interest of the U.S. brokerages.

Frederiksen said it was not a one-sided exchange.

“It started with a size issue but as we really (examined) the Canadian REIT industry, we realized that our assets are a pretty good fit because they produce a fairly consistent and predictable income stream,” he said.  “Given the desire for yield, that seemed to line up.

“We also believe that it is the first time that investors in Canada were given the opportunity to invest in institutional-quality industrial assets and the fact that they have exposure to the U.S. economy is a plus.”

WPT Industrial also pays its distributions in U.S. dollars, a plus for those who believe Canada’s loonie will continue to sink.

Choice Properties’ Morrison was quick to note that Loblaw’s newly minted REIT is not “single tenant” as is often reported, but rather a “dominant anchor” trust. Its properties are anchored by a supermarket and also feature other tenants (Loblaw brands shown in image taken from the Loblaw website).

Loblaw’s REIT IPO may have been an opportunistic move to cash in on investors’ hunger for yield – but it unlocked value the company had painstakingly created over decades.

“They were very, very intelligent and had a lot of foresight when they grew their business over time, from the mere fact that they wanted to own their real estate and not lease it and be in control of their destiny,” Morrison explained.

“Taking that approach, they built themselves what I describe as an iconic, grocery-anchored real-estate portfolio in Canada with some of the best locations that can’t be replicated.”

Having a supermarket anchor tenant is ultra-stable or, in Morrison’s words “non-discretionary.” People gotta eat, after all.

Loblaw has another thing going for it. Arguably the best supermarket operator in the country, it has 22 different banners, enabling  the company to introduce the right format for a particular market and to switch banners if necessary.

“If they have a concept that doesn’t work for that market, they have the ability to change it as opposed to saying, ‘It doesn’t work, we are leaving town.’ . . . As a landlord, that is what you want to hear,” Morrison said.

The panel also argued that Canada’s IPO system and investors are too focused on yield and that “flawed model” has meant that REITs have been paying out too much over the years. That’s a surprise, Sender noted, given that Canadian REITs have outperformed so many other markets around the world.

Sentry’s Mitchell had a two-word answer to the question of how Canada’s underdeveloped REITs have survived and thrived: market inefficiency. The REIT sector’s “fixation on yield” has meant investors have looked upon REITs as yield vehicles, rather than growth vehicles, and management has acted accordingly.

“Not being overly focused on ‘growth, growth, growth’ has protected Canadian REITs from blowing themselves up. There are a number of U.S. REITs that have gone on huge acquisition sprees or business building sprees that were forced to retrench to their core business of owning real estate and collecting rent.”

The focus on yield, along with the combination of market inefficiency, market immaturity, fortuitous economic occurrences as well as good old-fashioned Canadian conservatism or, as Mitchell described it: “some foresight on the part of management teams not to diversify or overdose” on growth has enabled Canadian REITs to thrive.