Five members of the Building Industry and Land Development Association (BILD) were recognized for their contributions to the industry and association at the annual Chair’s Dinner Tuesday at the Sheraton Parkway Toronto North in Richmond Hill. 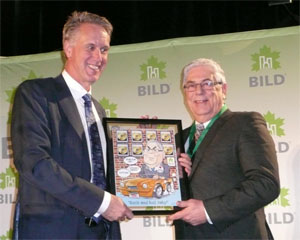 The most moving presentation was the posthumous honouring of Harold Shipp with the Lifetime Achievement Award. Shipp passed away at 88 in September and his daughter Catharine Shipp-Wells accepted the award on his behalf.

“Our intention was to bestow the Lifetime Achievement Award to him in the spring at the BILD Awards, but since the Chair’s Dinner was his favourite event,  because on this evening he was among friends and colleagues, we are going to present it tonight,” said BILD president and chief executive officer Bryan Tuckey.

“He built a remarkable Mississauga-based family real estate business and the term ‘Shipp-Built’ has become synonymous with a high level of trust, integrity and quality since 1923.”

A dream of building subdivisions

Shipp took over his father’s home-building business as a young man with a dream of building subdivisions. He went on to build thousands of homes in Toronto Township (which later became Mississauga) and in other parts of Canada and the United States. Applewood Acres, a Shipp housing development with 900 homes located south of the QEW at Dixie Road, was Canada’s largest housing project when it was completed in the 1950s.

It was fitting Mississauga mayor Bonnie Crombie joined Tuckey in presenting the award and speaking of Shipp’s contributions to the city.

Shipp also owned a General Motors dealership and was an active volunteer and philanthropist who supported several organizations in the community. Perhaps most notably, he donated $6 million to Trillium Health Centre in 2005.

Member of the Year and Award of Merit recipients

Lysha DeFreitas of In2ition Realty was named BILD Member of the Year for her engagement with various association committees. Her work with the annual membership drive, the Young BILDers Committee and the Race for Humanity has demonstrated dedication and leadership to the association and industry.

“She is a perfect example of an industry champion,” said Steve Upton, BILD’s outgoing chair and Tridel’s vice-president of planning and development. “Boundless energy, enthusiastic volunteer and always ready to help.”

The Chair’s Award of Merit, which recognizes contributions that have made a significant difference to the association and the industry, was presented to two people.

Tridel VP of customer care Danielle Feidler was recognized for her work with BILD’s quality assurance and customer experience committee, as well as the BILD builder’s council. She has moderated a number of association panels and been at the forefront of changing the way people view the customer service phase of development.

Metrus Development VP Darren Steedman has been instrumental in the association’s advocacy work with various municipalities on a number of key industry issues as the chair of BILD’s Peel chapter. He was named to Crombie’s transition team after she was elected Mississauga mayor last October and will also serve a two-year term as vice-chair on BILD’s board of directors.

Upton presented the awards to DeFreitas and Steedman and accepted Feidler’s on her behalf since she couldn’t attend. The outgoing chair’s contributions and “tireless commitment” to BILD during his two-year tenure were also recognized. He received a medallion to wear around his neck, a gavel mounted on a plaque, a caricature and a getaway to Prince Edward County — since Tuckey said he deserved a vacation.

Upton thanked BILD’s past chairs and presidents for their support, and also expressed his gratitude to the association’s current staff and board members. He’ll remain on the board as past chair.

Hall of Fame for Fraser Nelson

Metrus Development senior VP and general manager Fraser Nelson, who recently announced his retirement, was inducted into the BILD Hall of Fame.

“This gentleman has been at the helm of major residential, commercial and institutional development in all corners of the GTA,” said Upton.

“He is a consummate professional and honed his business and negotiating skills while working for Cadillac Fairview, M.M. Dillon and Morrison Herschfield. But when he became one of the first employees of Metrus Development 33 years ago, he knew he had come home.”

Nelson is a past BILD and Urban Development Institute (UDI) executive and board member. He was heavily involved in the merger discussions of UDI and Greater Toronto Home Builders’ Association (GTHBA), recognizing the strength of both associations and the benefit of creating one united voice. He received the BILD Award of Merit in 2009.

BILD has more than 1,450 members and was formed through the merger of the GTHBA and UDI Ontario to be the voice of the land development, home building and professional renovation industry in the Greater Toronto Area. It’s affiliated with the Ontario Home Builders’ Association and the CHBA.