Canada’s 10 largest pension funds are far more heavily invested in alternative-asset classes such as real estate, infrastructure and private equity than smaller domestic peers and that strategy has paid off. 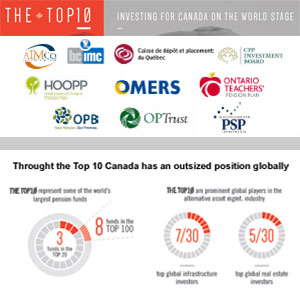 The top 10 class of pension giants has seen its assets under management triple since 2003 and has generated $600 billion in net investment returns from 2003 to 2014. Eighty per cent of the increase in value was driven by investment returns, according to the study by Boston Consulting Group.

While investments have driven returns in today’s low interest rate environment, the Canadian pension giants have also been able to keep a lid on costs by managing a large proportion of assets internally “which is generally much more cost-effective than externally,” Boston Consulting concluded in its report.

In fact, about 75 per cent of the big 10’s assets are managed internally as the funds “developed in-house expertise to invest in less liquid asset classes.”

The consulting firm found each fund’s strategy is designed to meet its unique mandate but that all 10 seek to build well-diversified portfolios that align with their relatively long-term payout profiles.

Given their heft, they have been able to invest 32 per cent of their investments in alternative-asset classes including real estate.

By comparison, most other Canadian pension plans carry an 11% allocation in alternative-asset classes while retail investors hold about five per cent alternative investments in their portfolio, a concentration which gives the biggest funds “greater diversification and alignment with long-term payout profile” than other investors.

“The Top Ten have shown impressive growth in investment capabilities and scale to manage the realities of a post-financial crisis world,” said Craig Hapelt, a Toronto-based partner at BCG.

“Not only do the funds represent an important aspect of Canada’s retirement income landscape, but their investments also have a broader positive impact on Canada’s prosperity.”

The big 10’s holdings include the likes of real estate operators and developers such as:

As well, the big funds own companies and properties such as:

The report also found the big 10 comprise “a significant component of Canada’s retirement income system, helping to provide financial security in retirement to over 18 million Canadians.”

Holdings of the big 10 are as follows:

Image above compiled from the Boston Consulting Group report.