Toronto-based hotel operator FRHI Hotels & Resorts has kicked off ambitious expansion plans to grow its hotel base by 50 per cent over the next half decade. 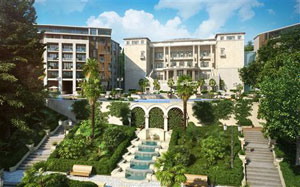 “Expansion is a key strategic priority at FRHI, and we have aggressive development plans in place to achieve our projected target of 50% growth over the next five years,” said Michael Glennie, the president and chief operating officer of FRHI. “Growing our brands with the right product, in the right markets is a key part of our development strategy, so we’re very excited to be entering or increasing our presence in a number of top worldwide locations this year.”

The hotel company currently operates 105 hotels and resorts around the world and expects to add another 50 locations over the next five years.

As befitting its strong Canadian roots, FRHI’s central operations are in Toronto, where it has approximately 350 employees. The company’s holdings include the hotels that were owned  by the country’s two national railways – CPR purchased CN’s hotel chain in 1988 and formed Canadian Pacific Hotels and Resorts, making it the country’s biggest hotel owner at the time. CP Hotels later purchased Delta Hotels, Princess Hotels and the Fairmont Hotels chain. The company was acquired in 2006 by Kingdom Hotels International and Colony Capital, which brought with them the Raffles and Swissotel chains.

“Probably 90% of that growth activity is taking place internationally, so outside of North America,” said Mike Taylor, a company spokesman in Toronto.

“All of our brands have specific holes to grow into,” he added. “There are also some countries, too, where we feel there is a lack of supply or there is an opportunity to grow the business.”

Those include “key gateway cities” where its customer base regularly travels to as well as tourist destinations where it currently lacks a presence.

The company’s Raffles hotel chain is a “five-star, ultra luxury” destination, with the Fairmont chain a notch below and the Swissotel chain positioned a bit lower as an “upper upscale” operator.

Taylor said that the five-year expansion will see growth at all three chains. “It comes back to when development opportunities present themselves, we take a look at the market, the type of product that is being developed, who the partner is, and what does that best align with on our brand side.”

FRHI can grow its hotel chain incredibly fast because it is a third-party development company that works with and for the ultimate owner of the property. “We actually don’t own the assets that are being developed; we are a partner and are coming in to manage the property.”

Typically, FRHI will take on a 30- or 40-year hotel management contract. Actual ownership of the hotels ranges from private equity to individual owners, said Taylor. “It is really all over the board.”

Beyond the seven hotels and resorts planned for 2014, FRHI has development projects underway in markets such as India, Russia, Indonesia and China set to open over the next five years. International expansion for all three brands will focus on key markets in Europe, Asia, the Middle East and Africa.

* Swissôtel Sochi Krasnaya Polyana, Russia –  Two new Swissôtel properties will open in Russia prior to the 2014 Winter Olympic Games in Sochi. Swissôtel Sochi Krasnaya Polyana, about 35 miles (60 km) from the center of Sochi city, will feature 166 guestrooms and suites including six Mountain View Penthouse Suites. The resort will be close to shopping and dining and only a few meters away from the area’s best skiing facilities.

* Swissôtel Sochi Kamelia, Russia (shown in the image) – A beach resort that is a reconstruction of a historical building with two modern side wings, it is situated in a natural park overlooking the Black Sea. It will feature 203 deluxe, contemporary guestrooms and suites, many with sea views, as well as two restaurants.

* Swissôtel Bodrum Beach, Turkey – This new property will occupy a waterfront location in Turgutreis, with close proximity to the centre of Bodrum and the airport. The two-storey hotel will comprise 66 guestrooms and suites as well as villas and duplex terraces which will house 72 private residences.

* Fairmont Riyadh, Business Gate, Saudi Arabia – This property will be part of a new mixed-use development project that will include the hotel, a convention center and commercial real estate space. The hotel will feature 287 guestrooms, including Fairmont Gold, the brand’s exclusive hotel within a hotel offering.

* Fairmont Ajman, UAE –   Situated on the Corniche, fronting 820 feet (250 metres) of “unspoiled, sandy beaches” it will feature 252 guestrooms and suites, including two penthouses.

* Raffles Istanbul, Turkey – Part of the new Zorlu Center, one of the largest developments in the city and Turkey’s first and only mixed-use project, the hotel will include 130 guestrooms and 51 suites. Will include a 12,916 square foot ballroom, swimming pools and a helipad.