It seems not a week passes without an organization or individual warning of the possible demise of Toronto’s long-running condo boom. 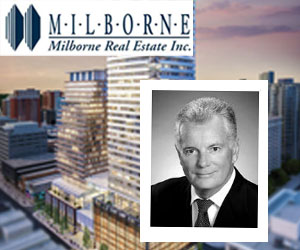 This week’s entry comes from Canada Mortgage and Housing Corp. which warned of “overbuilding” in Toronto (and Montreal). Its chief economist warned of “elevated” numbers of units under construction in those cities that could develop into overbuilding should sales be slower than expected.

So the big “if” is left hanging, are sales set to fall in Canada’s hottest market? We asked Hunter Milborne, head of Milborne Real Estate Inc., who is credited with the marketing and sales of 60,000 units worth approximately $10 billion.

Milborne’s take on the condo market

His take: Toronto’s condo market is healthy today and will be going forward, primarily because it is the only option for entry-level buyers.

“The biggest explanation is if you look at the single-family house market . . . if you try and buy a house in Toronto lately, anything under $1 million, there are multiple offers, it is difficult to buy,” said Milborne, who was dubbed the “Dean of Condos” by Canadian Business. “The condos, most of what we buy is $200,000 to $500,000. It is really kind of the only entry-level new housing that is available.”

He is also not worried that the industry trend to smaller and smaller units by developers, in part to keep prices down, will be a problem down the road when the millennials get busy making families.

“It’s primarily single guy, single gal, young couple, that is primarily what investors purchase to rent out, but more and more you are getting families that are having a kid in a two-bedroom or a small three-bedroom and realizing that the trade-off is to drive for an hour and a half each way each day and that is really a very happy trade-off.”

He does see a slow trend towards larger condos as some developers target buyers who will outgrow that first unit, but it will not be dramatic. “The studios, the one-bedrooms and the one-plus-dens are still the bulk of the market just simply because you have a lot of single- or two-person households and they are much more affordable.”

As for the fate of all those small units that are going to be outgrown, “there is always going to be a supply of young people moving to the city.”

The second is the Imperial Plaza development which is a remodelling of the old Imperial Oil headquarters in Toronto. That 23-storey building at Yonge and St. Clair features units from 530 sq. ft. to expansive penthouses.

That mix has sold well. Of the 400 suites in the building, only 38 remain unsold with occupancy starting next month. The good news for would-be buyers is that three of the five penthouses were unsold as of last week.

Milborne looks to George Carras, president of new-home research firm RealNet Canada Inc., as a source for market insights. The Toronto firm’s recent research backs up some of the condo seller’s views.

Last month, RealNet reported that the ranks of ever-smaller one-bedroom condos coming to market has fallen dramatically just over the last few months as developers shift to more two-bedroom units averaging more than 800 sq. ft. which are geared towards first-time buyers and young families.

RealNet also reported sales of pre-construction condos jumped 39% in September compared with a year ago (2,262 units sold compared to 1,393 in Sept. 2013), the second-strongest September on record for highrise sales, the numbers show.