Final approval has been given and construction is ready to start at Lower JCT. (Lower Junction), a new Toronto neighbourhood project that will encompass eight acres in the south end of the city’s Junction Triangle area. 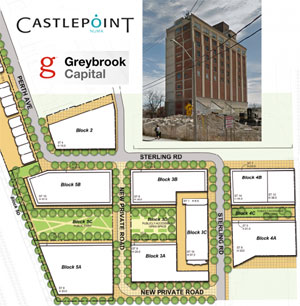 “There’s going to be tremendous value through a strong mixed-use vision as well as the community amenities that will be part of the project, including daycare facilities, affordable housing, larger units to support families and a strong public realm,” said Elsa Fancello, development manager for Castlepoint Numa, which is partnering with Greybrook Realty Partners on the project.

“We’ve cleaned up a former industrial site and are transforming it into a mixed-use neighbourhood all centred around and supported by transit.”

Lower JCT. is located within easy walking distance of two stops on the Bloor subway line, two streetcar lines, GO Transit and the only intermediate stop on the newly launched Union Pearson Express airport rail link service. It also provides access to the West Toronto Rail Path off Perth Avenue, which will be realigned as part of the development.

More than a million square feet

The site was purchased by Castlepoint Numa in 2008 and the company considered it for Pinewood Toronto Studios before deciding to build in the Port Lands district on the eastern waterfront.

The company, in its 25th year, excels in heritage preservation, brownfield reclamation and revitalizing sites in decline.

Its other projects include: 3C Waterfront, a 13.5-acre site in Toronto on the shore of Lake Ontario in collaboration with Cityzen Development Group and Continental Ventures; Backstage On The Esplanade, a 36-storey condominium across from Toronto’s Sony Centre for the Performing Arts; and L Tower, a 57-storey, 593-suite condo designed by Daniel Libeskind adjacent to the Sony Centre.

The Lower JCT. land was contaminated from its past industrial uses by Northern Aluminum Company and Tower Automotive, though Rio Tinto Alcan has cleaned it up over and above requirements to support the standards of the mixed-use development plan.

Castlepoint Numa has worked with Toronto city councillor Ana Bailão, local residents and business owners over the past seven years to get to this point, a collaboration enhanced by the developer’s community involvement. The site has hosted outdoor film screenings, community organizations including Art Spin and Junction Flea, and was recently involved in the BIG on Bloor Festival for the fourth year.

The Auto Building, a 10-storey structure built in 1919 and once the tallest in Toronto, is in a state of disrepair but will be completely renovated and remain the tallest and most prominent building in Lower JCT. The exterior has been granted heritage status and Castlepoint Numa is working closely with the Heritage Preservation Services section of the City Planning Division and heritage architectural firm ERA Architects to maintain the historic façade.

Tens of millions of dollars will be invested in restoring and preserving the building, which is targeting completion by the end of 2016. One of the first steps is removing existing windows and creating exact replicas to replace them. Interior demolition will begin in September.

The Museum of Canadian Contemporary Art will relocate from its Queen Street West location and occupy the first two storeys and half of the third floor. A café will also be incorporated at ground level.

“For the balance of the building, we’re in conversations with a number of tenants,” said Fancello. “We’re really looking for creative and digital media-type users.”

Several other new buildings are in the works and an international team of architects — Chris Peck of Los Angeles, Peter Clewes of architectsAlliance, Prishram Jain of TACT Architecture and Gianni Ria of Page + Steele/IBI Group Architects — has been selected. The detailed design process is underway for Lower JCT.’s first development phases.

Townhouses will run along Perth Avenue and Fancello said they’ll start to be marketed this fall with an aim to have them ready to occupy by late 2016 or early 2017. Lower JCT. will include eight other residential, mixed-use and industrial/commercial buildings and will feature a new daycare facility for 36 children.

“Serious conversations” are also taking place with a microbrewery, according to Fancello.

“We want to create a very vibrant neighbourhood and we see having strong commercial and retail life at grade to be critical,” said Fancello.

Castlepoint Numa is working with the City of Toronto to come up with a plan for the affordable housing component of Lower JCT., and Fancello emphasized they’ll be incorporated into the development in its early stages.

At least 30 per cent of all the Lower JCT. residential suites will have two or more bedrooms.

“We’re also looking at potentially creating a full range of larger units because we see the need in the neighbourhood,” said Fancello.

Lower JCT. will incorporate a new private road that will meet Sterling Road in two spots. It will also include more than an acre of land for a new public park and open green spaces, including a plaza immediately to the west of the Auto Building.