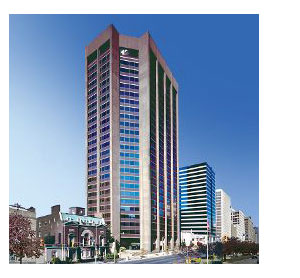 “The building is a hub of activity that appeals to creative and enterprising organizations and the millennials who work for them,” Crown marketing and sustainability manager Monica Di Zio said. “We’ve brought the building up to a level where we compete with the best in class.”

Crown acquired the former Zurich Insurance Company Ltd. building in June 2010. Zurich, which had been its primary tenant for more than 40 years, vacated the property and its 120,000 square feet of space in January 2014.

“Crown took this opportunity to completely revamp the building with a $10-million capital investment into the property aimed to attract today’s most creative and expanding tenancies,” Di Zio said.

The 25-storey, class-B structure was built in 1970 and was showing its age. The environmentally friendly renovation program included installing new elevator cabs and shower facilities as well as revamping the lobby, corridors and common area washrooms with new paint, light fixtures and, where applicable, carpets.

Water conservation was top of mind in renovating the washrooms, according to property manager Carm Berardi.

“But the most ambitious project was the installation of an entirely new window and cladding system while the building was tenanted, with minimal impact to occupants,” said Di Zio. “The outdated single-pane windows with a deep tint were a huge deterrent to prospective tenants due to increased energy usage as well as difficulties maintaining internal temperatures.”

“They were able to install the new windows and still leave the old windows in place,” Berardi said of the work done by C3 Polymeric over two-and-a-half years.

“Once the new windows were in, they could come inside and remove the old windows. There was never any exposure to the elements outside.”

C3 Polymeric employees came in after hours to take out old windows and cap the new ones. The replacement windows are double-pane and have film to reduce glare, reject UV rays and control heat. New blinds are also being installed.

C3 Polymeric created a time-lapse video, shot from a building across the street, of the window replacement process.

Berardi said it’s too early to determine the energy savings spurred by the renovations, but it’s anticipated to be around 20 per cent. She added tenants have been impressed with the changes and that Crown has applied for a LEED-Gold certification.

The 387,643-square-foot building, which includes 115 reserved underground parking spots, is 91 per cent leased. The primary tenants are: the Ontario government, which occupies the second to 14th floors; Tata Consultancy Services, which takes up the top three floors; and HOK Architects, which occupies a floor.

Crown, founded in 2001, has acquired and managed more than seven million square feet of office space in transactions valued at more than $2 billion.