Newmark Knight Frank Devencore’s Toronto West office has quadrupled in size since opening in 2012 and has just grown further with the appointment of commercial real estate industry veteran Sean Fiset as vice-president and sales representative. 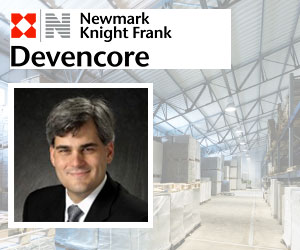 Rob Renaud, managing principal/broker of record of the Toronto West office, credits collaborative efforts for the growth of the tenant-focused brokerage’s branch since it launched to prioritize a growing industrial platform.

“To grow our company, we needed to step out of our comfort zone, which was primarily downtown office leasing and suburban office leasing, and get involved with more creative types of projects,” Renaud said of opening the Toronto West office.

“I try to create an environment where people aren’t in silos or are competing against each other, but are collaborating as a team and leveraging their unique skills to create something special and unique for the client instead of having a bunch of guys that are all chasing the same business.”

There’s also office space ranging in size from 1,706 to 37,851 square feet in five buildings in Burlington, Mississauga and Etobicoke, as well as two combined office/industrial properties in Toronto and Mississauga, available for sublease.

The Kingston warehouse is being co-marketed with Newmark Knight Frank Devencore’s Ottawa and Montreal offices.

“Because we’re working for tenants or users of property, those clients might have multiple needs both here in this market and provincially, nationally or internationally,” said Renaud. “The guys who end up working for our firm are becoming more like corporate advisers than guys who just look at the market.”

Although Renaud can’t name clients because of confidentiality agreements, he said the office is also representing tenants for third-party logistics and distribution centres of up to 400,000 square feet, handling a number of acquisitions and dispositions of offices and manufacturing facilities, and has just been assigned the disposition of a large tract of land in Peel Region.

“We’re seeing quite a bit of demand for 100,000- to 150,000-square-foot industrial facilities,” said Renaud, who anticipates a growing market for buildings of up to a million square feet for large e-commerce operations and other companies needing huge amounts of warehouse space.

Renaud praised Orlando Corporation for constructing an 868,122-square-foot industrial building, with expansion capability of another 320,787 square feet, with 40-foot clear heights as opposed to the 32 feet most of its recent buildings have incorporated. The structure at 8050 Heritage Rd. in Churchill Business Community in Brampton is scheduled for a December completion.

“I’m proud of Orlando for doing something creative like that because I think the market will take notice,” said Renaud. “It’s a prudent developer that’s conservative and smart and, if they’re putting up a building like that, they must know there’s demand for it.”

Toronto is the fourth-largest industrial market in North America and Renaud believes it’s opening up to increased innovation.

“I think developers will be creative to attract tenants. If they want to get these bigger spec buildings leased, they’re going to have to think about really dissecting the market to see who’s out there to lease those kinds of buildings. A lot of them end up leasing to third-party logistics companies for manufacturers who don’t want to warehouse themselves.”

“Sean is professional, dynamic and extremely client-focused,” said Renaud. “As a valued member of our community, we welcome his drive, collaborative spirit and keen sense of the market to our team.”

Renaud said associate VPs Marc Dexter and Chris Allen have expertise in land assembly and major land parcel disposition. They’ve been involved in major investment sales and manufacturing facility site selection, including being part of an Ontario-wide site search on behalf of a Spanish company.

“They’re well-rounded and technically sound guys who can handle a wide variety of projects on the industrial side in the marketplace, but also do some work with clients who have office needs,” said Renaud. “They have that ability to be very adaptable, which is why I like having them on my team.”

“Greg helps our clients look at the bigger picture before we get into the trenches on the real estate piece,” said Renaud. “He helps set the agenda with their management team.”