The vacancy rate for a Toronto West office market has risen to its highest level in 12 years, spurring innovative leasing strategies from landlords. 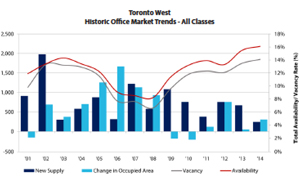 “Most of the big blocks of space that are currently sitting vacant are in and around the airport area, and will likely move more quickly than many people are anticipating,” said John Markle, research associate for Avison Young.

“There is plenty of new development taking place in areas like Heartland, Meadowvale and Oakville to keep future tenants pursuing environmentally conscious and amenity-centric leasing options interested in the Toronto West office market.”

Though not reflected in the fourth-quarter numbers, Target Canada’s imminent exit from the country will result in more than 180,000 square feet of vacant head office space the company will leave behind at 5550 Explorer Dr. This sudden impact will definitely be a blow, but not a knockout punch.

“Undeniably, the loss of Target is a hurdle that the Airport Corporate Centre and the surrounding nodes are currently facing, but this is class-A LEED-Gold space in a prestigious, recently constructed building in one of Toronto West’s key nodes,” said Avison Young broker and principal Joe Almeida.

“There will be no shortage of interest in the space from companies eager to take advantage of the opportunity.”

The continuing strain on the suburban market, however, has forced some landlords to offer creative leasing options for tenants and the brokers who bring them to their properties.

“One method used to address the latter issue that Dream is currently employing is double commissions for brokers who do deals in some of their assets in the airport area,” said Markle.

“Incentives for tenants are likely to be transportation-based. See for example the agreement that Target made with Menkes when they signed their lease that Menkeswould provide shuttle buses to make the space more accessible to Target’s staff. Similarly, when BMO moved from their location on Islington to their new space in Meadowvale, part of the agreement stipulated that a bridge would be constructed connecting the building to the nearby GO station.”

A sign of confidence in the Toronto West market can be found in developers moving forward with speculative projects. Carttera and Westbury International will build multi-level office buildings, while Fengate Capital Management and The Pauls Corporation will focus on new flex buildings in the Burlington and Oakville areas.

While Toronto West’s vacancy rates are high, and appear to be climbing, they outperformed Toronto North and Toronto East last year in terms of leasing velocity, absorption and new product coming to market, according to the Avison Young report.

These high rates in the suburbs aren’t necessarily a result of a mass migration of businesses downtown, owing to the high costs and logistical challenges in finding large amounts of available space under one roof.

“Companies such as Winners, Sobeys and Canon have pursued other options and built their own head offices in the Toronto West region,” said Markle. “One of the direct advantages to this method is the flexibility that comes with designing your own office space.

“For example, Canon’s new headquarters in Brampton will feature a 5,000-square-foot showroom for their products and a central atrium extending from the ground floor to the top that will provide plenty of natural light to the building and its built-in amenities.”

Oakville is one of the stronger and more reliable nodes in the Toronto West market. Geotab inked a long-term headlease for about 37,000 square feet of single-storey office space at 1075 North Service Rd. and John Deere Financial leased a similar amount of space at 3430 Superior Ct. in the last quarter.

Oakville also boasted the most office space currently under construction at the end of 2014, with 532,061 square feet. Much of that is concentrated in Phase Three of the Westbury Business Park (208,380 square feet) and Phase Two of the Joshua Creek Corporate Centre (110,200 square feet).

“Oakville is in a good position to attract a diverse crowd of tenants,” said Markle. “One only needs to look at the meteoric success of the Joshua Creek Corporate Centreand its sister facilities to see the plentiful demand for space in that area.”