Canary District ready 10 months ahead of Pan Am Games

Toronto’s Canary District property will be turned over on time and on budget from Dundee Kilmer Developments Limited to the 2015 Pan Am/Parapan Am Games organizing committee in February. The property will evolve from a temporary athletes’ village into one of the city’s most interesting new housing options after the games. 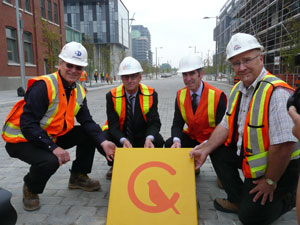 The $514-million project in Toronto’s West Don Lands is 95 per cent complete and developers led a tour around the 14-hectare (35-acre) property on Tuesday that included looks inside two condominium buildings and the 7,380-square-metre (82,000-square-foot) Cooper Koo Family YMCA complex.

“We’re very proud of everyone’s contributions to the project,” said Tanenbaum. “EllisDon and Ledcor, at the pace of $1 million a day and with 700 workers onsite every day, were able to organize and accomplish what really hasn’t been accomplished in very many athletes’ villages around the world.”

About 10,000 athletes and officials

Approximately 10,000 athletes and officials will be housed at the complex next July and August before the buildings are re-imagined as The Canary District and full-time residents start taking occupancy in the spring of 2016. Spaces that will simply but comfortably house an average of five athletes during the Pan-Am Games will become one-bedroom condo suites afterward.

“Athletes from 41 countries will have a great place to stay and enjoy, and then the village will be transformed and its legacy use will emerge,” said Tanenbaum. “Temporary dividing walls will come out, kitchens will go in, hardwood floors will go in and other finishing touches will be applied.”

Canary District features six buildings designed by architectsAlliance, KPMB Architects, Daoust Lestage Inc. and MacLennan Jaunkalns Miller Architects. It’s received a variety of industry awards, including the BILD Community of the Year Award, Canadian Architect Award of Excellence and the National Sales and Marketing Gold Award for Community of the Year by the Washington, D.C.-based National Association of Home Builders.

When Dundee Kilmer reassumes control of the project after the Pan Am Games, housing will be comprised of: 810 market units, including townhomes and loft units; 253 units of affordable housing, including two-storey maisonettes and one- and two-storey apartments; and a George Brown College residence that will accommodate 500 students.

The buildings are designed to meet LEED Gold standards and honour requirements of Toronto’s Green Building Standard. This includes the integration of green roofs, low-flow fixtures in washrooms, Energy Star-rated appliances, drought-tolerant plants, bicycle storage and parking, a car-share program and electric recharging stations. Residents will have unlimited Internet service with speeds up to four times faster than those in typical residential networks.

Front Street is the spine of the community and its granite curbed extension will include wide sidewalks lined with 3,600 square metres (40,000 square feet) of retail space on the ground floors of its residential buildings.

LiveWorkLearnPlay — which has created mixed-use neighbourhoods in Whistler, B.C., Blue Mountain near Collingwood, Ont., and downtown Boca Raton, Fla. — is spearheading the inclusion of public spaces linked by shopping, dining and entertainment options, townhouses, maisonettes, and cultural and recreational venues.

“It’s really designed with a nod to the late great Jane Jacobs with ‘eyes on the street,’” said Tanenbaum. “Densities are at a very livable scale, with 12-, 13-, 14-storeys and a connection with people living in the area and the street.”

The historic CNR and Canary Restaurant/Palace Street School heritage buildings have been retained and will act as gateposts to the community. The Canary, the former greasy spoon diner which lent its name to the community, is being renovated on the outside but its interior will essentially be left alone.

The 7.2-hectare (18-acre) Corktown Common park, where kids were already playing this week, sits at the eastern end of the property and acts as a gateway to more than 1,800 kilometres of provincial parks and trails. The nearby Lower Don River Trail links the neighbourhood to the Martin Goodman Trail, Kew Gardens and Evergreen Brickworks. The park also features a multi-functional pavilion, children’s playground and water features.

Bayview Avenue will extend into the community and connect to convenient downtown routes such as Parliament Street and Cherry Street, which is being upgraded and widened to accommodate streetcars connected to the King Street line.

A network of pedestrian-friendly roads and bike paths will connect to adjacent communities. A secondary system of pedestrian routes follows the paths of two former CNR rail lines, while all laneways, courtyards and paths are linked to create continuous routes across the district. The site is an approximately 1.6-kilometre (one-mile) walk to the heart of downtown at Front and Yonge streets.

Walkability and easy access to public transit are increasingly attractive features, since a recent Environics survey for RBC and the Pembina Institute revealed that 81 per cent of homebuyers would choose less car-dependent neighbourhoods over big lawns and extra bedrooms if cost wasn’t a factor.