Touchstone auction declared a success as most units sold

An online auction of luxury fractional resort units at the Touchstone On Lake Muskoka in Ontario has resulted in the sale of 80 of 83 suites.

Touchstone is a one of Ontario’s most luxurious five-star, four-season fractional ownership resorts that opted to take the unusual route of selling one-eighth fractions of its units by auction as reported by Property Biz Canada in May. 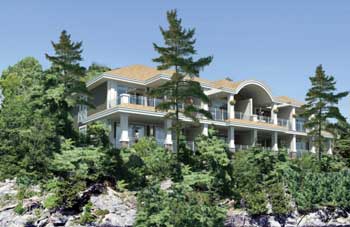 Gordon’s Estate Services in Kingston, which has sold nearly 2,000 properties at auction in Canada, conducted the sale.

The auction attracted 156 bidders who participated in a three-round process described as “open, transparent and online” in a news release by McOuat Partnership, which is responsible for sales and marketing for Touchstone.

“What made this auction spectacular was our ability to overcome the right of rescission factor,” said Gordon’s Estate Services real estate broker/partner Manson Slik. “In other Canadian resort auctions by US companies working in Canada, the seller ended up rejecting many of the bids and many more buyers rescinded on their purchases.

“Because of the transparent structure of the online auction and the timing of the three rounds, we were able to generate a near sellout with no rescissions.”

Selling prices for each one eighth fraction are available on the Gordon’s  website.  The site shows that there are three remaining units for sale, each for about $68,000.

Sequel Hospitality Investments Inc. recently purchased Touchstone and will focus on condominium development for what is reported to be an additional 56 lakeside whole ownership condos.