Owners of class B office buildings in major markets such as Toronto and Vancouver are facing an epic challenge.  Millions of square feet of AAA class office space now under construction is pushing older commercial properties down a notch, or two in terms of desirability.

So what’s a B landlord to do besides sell? 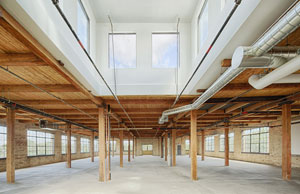 Colliers International outlines three different strategies for B owners, which it describes as specialization, capital injection and repurpose with illustrative case studies for each.

“Those are the three that we found when we were doing our research that are proven to be the most popular and realistic for a landlord to consider,” said Curtis Scott, a market intelligence analyst with Colliers in Vancouver.

Colliers classifies A and AAA buildings are those located within a city’s central business district, with proximity to mass transit, amenities like ground floor retail and community space. B and C class office, on the other hand, is characterized by its less strategic locations, limited transit and amenities and less attractive office space.

One emerging strategy for landlords with less desirable office space would be to specialize in a specific tenant type or industry. An example Colliers raises is that of a landlord who decides to compete for tenants in the Information, Communication and Technology (ICT) sector.

(Colliers does warn that specialization “is a risky maneuver as it identifies the building to a specific sector, and as a result, companies in other sectors often overlook the building.”) It also would seem to make the landlord more vulnerable to economic cycles of the particular industry.

The case study Colliers selected for the specialization option was Perimeter Development’s acquisition and repositioning of 305 King Street West in Kitchener, Ont. (shown in image). When it acquired the building and identified it as a candidate for specialization, it had a vacancy of about 65%. Perimeter has invested in transforming 305 King into a location for IT and high-tech firms with floor to ceiling windows, open floor plates and fibre optic cables throughout the building.

While the project is still underway, the building is now 70% occupied and vacancy has been cut in half.

“Jumping into specialization is risky because you are remaking your building just for one type of industry but that may be the right decision,” said Scott.

Throwing money at old or obsolete buildings, what Colliers terms capital injection, is the most popular way to reposition a building, the firm has found.

Facelifts represent a significant investment and can include expanded retail on the ground floor, community space in the building, new elevators, and new HVAC and electrical service or electrical systems.

If the capital improvements are ambitious enough, they can sometimes bump up a building’s classification (from Class C to Class B or Class B to Class A), improving net rents. A downside to this approach is that existing tenants would have to work amidst the ongoing construction, which may  lead to higher turnover in the short term.

Colliers points to the revamp of Vancouver’s 411 Dunsmuir St. building by owners Omnicron and CRS Group of Cos. as an example of capital injection done right. That property, a former  seniors centre that housed offices various non-profit medical groups, was plagued by high turnover. The new owners decided to strip the building back to its original shell and completely renovate it. It included a seismic upgrade to the building, a new HVAC system, new windows and asbestos removal. Also, the
landlords built an addition to the building, which will increase the size of the floor plates.

Colliers noted that while undergoing the renovations, big office tenant, Morneau Shepell,  expressed interest in occupying the building. That has led Omicron to junk its plans to occupy the building, instead making way for Morneau Shepell. The improvements also raised the  classification from Class C to B.

“This is still in a great area, it is still close to a lot of amenities and transit,” said Scott. He noted that the owners have decided to hold onto the building longer than they initially thought that they would.

Colliers expects that landlords repurposing existing buildings will become a major new trend as new triple-A towers come on stream in major cities in the next few years.
Colliers dug back a few years to find a successful example, namely Vancouver’s BC Hydro Building (shown in black and white image) now known as Electra. A recession in the early nineties came just as nearly two million sq. ft. of new supply hit the market, causing vacancy rates to nearly double by 1992 to 16%.

Class B and Class C office buildings cut their asking lease rates in order to stay competitive. Owners of the BC Hydro Building took a different tack, converting to residential condominiums, an asset in high demand in downtown Vancouver. Harrowston Developments Corp., with the understanding that BC Hydro was going to vacate the building over the next few years, purchased the BC Hydro

Building in 1989 for $56 million with the intention to renovate and lease the building as a multi-tenant office building. By 1992, the building was assessed at $40 million and Harrowston thought the best  alternative was to sell. Finding no buyers, it decided to convert to residential condos.

It won city council approval to convert into 243 residential strata lots and one commercial. “Although  requiring a significant amount of capital, this strategy proved to be successful due to the high demand for residential condominiums in downtown Vancouver,” Colliers concluded.

“It is not vanilla for all markets and all landlords, it really takes some thought,” said Scott. “Looking at the Electra case study, they went through all the various strategies to see what was best for them. I think that getting involved with the right professionals to help with strategic planning if you do see vacancies going up in your building is important because there are various avenues to go down.

“I don’t think looking at one trend means that that is something you should be doing.”