A German developer from Luxembourg who fell in love with Nova Scotia is one of the driving forces shaping Halifax’s skyline.

Wolfgang Thiel is currently doubling the floor space of downtown’s TD Centre to 200,000 square feet in a redesign that is incorporating an historic building façade and will see the overall project attain LEED Gold status. 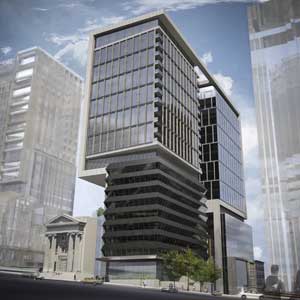 In February, the soft-spoken developer will go before Halifax Regional Municipality city council to gain approval for 22nd Commerce Square, an even more audacious development.

The latter, a 500,000-square-foot, twin-tower development, is aiming for LEED Platinum status. The buildings are anticipated to rise 21 and 26 storeys above the Maritime city.

22nd Commerce Square will remake a city block containing no fewer than five heritage buildings into a boutique hotel, 200,000 sq. ft. of class A office space, 88 condominiums, retail, restaurant and public space. Thiel said he will know the cost of the square in the next couple of months.

The 88 condos are aimed at the luxury market, while the boutique hotel will have 96 suites. A 3,000-sq.-ft. central, public atrium will include street-level plazas, while the restored Bank of Commerce Building will host the restaurant as well as a small conference centre.

The building will include geothermal heating and cooling, a heat recovery system that draws energy from sewage waste, a rain water collection system, and solar hot water panels on the roof, among other innovations.

The building has gone to pre-application and Thiel expects approval by the end of February. Nor does he foresee any roadblocks in a city where both building heights and their impact on heritage are flashpoints.

Old and new together

The building’s architecture firm, Lydon Lynch, has plenty of experience building in Halifax. The firm is currently working on the LEED Gold Waterside Centre, an 86,000-sq.-ft. class A office building that incorporates the facades of five historic buildings into its design.

Thiel also sat down with city staff before the pre-application to make sure everything was in order. “We even went a step further and included the Heritage Trust in the process before we went to pre-application, just so they’re aware of what we’re doing, and that was pretty positive,” Thiel said.

Originally from Trier, widely believed to be Germany’s oldest city, Thiel is well aware of heritage and its meaning to a community, something that infuses the 22nd Commerce Court project.

Thiel arrived in Nova Scotia from Luxembourg in 2000. While visiting a friend, he was shown land on the province’s South Shore in Shelburne County and fell in love, building a cottage there.

The logistics company owner and beverage company entrepreneur – he is marketing a drink called Sol Mate – began buying up buildings in downtown Halifax. Thiel, who has called Halifax home for 18 months, also owns the Bank of Montreal and current RBC buildings.

Up until the development boom currently sweeping Halifax, very little had been built in the last 30 years. Thiel said he wasn’t interested in selling his buildings and decided the time was right for redevelopment. He targeted mixed-use because he believes people should have the opportunity to live where they work.

“As traffic in Halifax gets bigger and bigger, people are sitting in their cars for 45 minutes to get to work,’’ says the developer, whose architect on the building’s website quotes Richard Florida on the importance of increasing density in cities.