U.S. border no barrier to Canadian RE hunters: CBRE

It is likely no surprise to seasoned real estate vets who literally trip over competitors in New York, Chicago and Seattle, but it is still something of a surprise to find that Canadians make up the biggest single investor group when it comes to U.S. real estate. 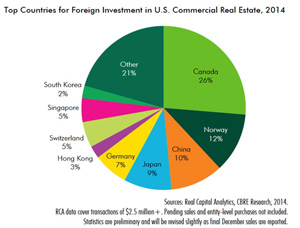 Canadian investors sunk more than $12 billion Cdn worth of direct investments in the States last year, more than double the amount of investment from oil-rich Norway, No. 2 world economy China or that of Japan and Germany. Canada’s share of the $51 billion of foreign real estate worked out to 26 per cent of the total, according to research out this week from CBRE. No. 2 Norway steered $5.5 billion, or 11 per cent, into the U.S.

Canadian investors kept up their torrid pace to start the year, laying out $3.41 billion for U.S. real estate as of mid-January 2015, CBRE noted.

“Barely a week goes by when we don’t see some sort of announcement, whether it is Oxford, or CPP or whoever, Brookfield, buying in the U.S.,” said Ross Moore, CBRE’s director of research for Canada. “But it is quite startling when you actually see the numbers in aggregate. You are kind of blown away.” (Pie chart from CBRE research report.)

But what about the loonie?

Canada’s falling currency puts the pace of future foreign investment into question, particularly in the U.S. where the loonie looks weakest against the greenback.

The research said “it depends” as the influence of the lower loonie will be different for the three main purchasers of foreign real estate: pension plans, REITs and private equity players.

“For the privates, yes, I think that with the dollar at 80 cents that is a big headwind,” he said. “It is not to say that you will not see any, but that is the one that is going to slow the most. The REITs chase cash flow so as long as they can buy something there with a good cap rate, I think that the REITs might actually continue – maybe not at the same extent.”

The deep-pocketed pension players, squeezed by low rates and selling ranks of retired members, face different pressures and might be least affected by currency fluctuations.

“They are absolutely desperate to  diversify and they have a very long time horizon on these things. So I think that they can actually look through the exchange rate. I know that some of them have hedged the dollar but you can only do that so far out.”

Bottom line, CBRE expects the quick $2.8 billion invested out of the gate this year will result in higher investment than last year, totalling about $13.7 billion. “Real estate investors love growth and at the moment, that is what the U.S. offers, growth. I think you will be surprised how they keep making acquisitions in the U.S.”

Supports for investment include a stronger economy (Oxford Economics’ current GDP forecast is 3.3%) and expectations for strong real estate demand “and all measures of real estate performance.” Negatives include the challenge of “finding attractive opportunities with reasonable pricing that can produce a favorable risk-adjusted return” as well as currency.

Moore adds Canadian investors have built impressive investment platforms which tend to create a momentum all their own when it comes to international acquisitions. “Groups like CPP and Oxford, they have entire teams that are all set up, they are fully operational, and you don’t tend to shut those down overnight.”

The need for scale also creates momentum: “With a lot of these groups, it really doesn’t make sense to have only one or even two properties in a particular market,” he said. “You are going to identify, let’s say Boston, and you have made a five-year plan to have a fairly extensive Boston portfolio.”

That market-by-market focus should make Canadian dollar weakness less of a brake on investment.

“You have groups that have already started down that road, they have committed to a market. Opportunities don’t come up all the time so when they do come up, you do have to take that leap, even when exchange rates are at, let’s call it 80 cents.”

International men (and women) of mystery

Credit those well-staffed investment groups and four consecutive years of heavy investing ($10.9 billion, $11.8 billion, $13.4 billion and $12.1 billion from 2011-14), but the secret is out on Canadian investors: they have capital and generally know their stuff when it comes to spending it.

“They didn’t come out and say it but I got the sense that – maybe admiration is the wrong word – but certainly respect,” said Moore of his U.S. partners’ take on the research. “Canadian investors, we are well-respected.”

And, no longer anonymous. “On almost a personal level, I was pleasantly surprised at how informed my U.S. colleagues were . . . I was surprised how well they knew the Caisse, Ivanhoe Cambridge,” and others.

Other highlights of the CBRE report:

CBRE noted that three of the top 10 investors are “multi-employer pension plans” which handle the defined benefit pensions of various public entities in their jurisdictions and are a rarity in the U.S. but common in Canada. The top three for investment in 2014 were Caisse de dépôt et placement du Québec, Canadian Pension Plan Investment Board and Ontario Municipal Employees Retirement System.

The list of top cities for Canuck bucks in terms of transactions in 2014 was led, perhaps not surprisingly, by Manhattan at $4.1 billion. It was followed by: Boston $2.7 billion; Broward $702 million; Seattle $598 million; Dallas $490 million; Phoenix $453 million; Houston $422 million; Atlanta $419 million; Chicago $348 million; and other municipalities at $5.1 billion. There was a total of $15.6 billion concluded and pending transactions.