After decades as one of the most high-profile urban planners on the planet, Larry Beasley — retired chief planner for the City of Vancouver, professor and global city-planning consultant —  along with co-author Jonathan Burnett, have written a call-to-arms for cities and suburbs. 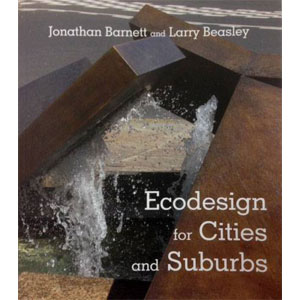 Their book, Ecodesign for Cities and Suburbs tackles the two most pressing issues facing our industry: how to build/rethink where we live so that we are making places that are both environmentally sensitive and livable. It is both practical and fascinating.

Full disclosure: Larry and I are good friends. I don’t pretend to be unbiased: I am a huge supporter and massive fan of the work Larry has done and continues to do in the urban planning arena.

David Allison: Why this book, on this subject, now?

Larry Beasley: What’s important isn’t who wrote this book but that it got written. Because of the experiences I’ve had, and that my co-author Jonathan has had, we were able to see this global-scale fundamental contradiction that we are all living through, and it’s a big deal.

We are urbanizing around the world at a rapid pace, but we are building cities that are negatively affecting the environment in dramatic ways, and that aren’t really very livable. It’s an urgent situation. We need to get everyone in the business of building cities to think about how to build in a way that is sustainable, and green, and livable too.

So we didn’t write a theoretical book. Ecodesign is a very practical book. We found examples of projects that have already gone through the sometimes elaborate rituals we use to build cities; rituals of politics, planning, policy, community engagement, financing, risk, and so forth. These examples are great blueprints for us to all borrow from. What we have to do is knit these isolated examples together into a new and comprehensive way to move forward.

DA: What is unique about this book and this idea?

LB: We’ve done something that we haven’t seen any other book do, and it’s reflected in the title: it’s about ECO and DESIGN — ecological imperatives and livable design. Normally people work with and talk about one or the other. But we think they must go hand in hand.

A second thing that is special is that the book doesn’t just focus on core cities. It talks about the suburbs, and doesn’t demonize them.

DA: Wait a minute, you’re famously on record as not being a member of the suburban booster club.

LB: That’s true. I haven’t always been interested in suburban communities because for so many years, my focus was on core cities.  It always fascinated me that in urban centres so much can happen in such a condensed timespan. But we all have to realize that suburban communities are not going away. Neither are cars. Even after my entire generation of city planners spent their careers trying to figure out ways to get people to abandon a car-centric lifestyle and live in dense urban centres, we’ve only moved the needle on the number of people by maybe five per cent.

Urbanists in general have been negative about the ‘burbs, but cars and suburbs are here to stay. It’s time to talk about how we can make them better; and the answer is not to just apply urban principles. Urbanism is largely irrelevant in suburban political and social circumstances – and to suburban consumers and voters. So the book offers some very interesting examples of suburbs that work as suburbs. These are places that resonate for consumers – low scale, lots of green, spacious – but they can also work for the planet and be vibrant. They do not have to be dull or uni-dimensional. That’s our message.

DA: As a dyed-in-the-wool urbanist and downtown-condo-dweller myself I am having a hard time imagining a successful and livable suburb. Help me out?

LB: We are facing the suburban challenge today the way planners like myself were facing the urban challenge 25 years ago in core cities. Look, suburbs have been the preferred and majority urban system since the Second World War. But there are a whole array of things that can be done to make suburbs very positive.

LB: There are Street Car Suburbs — inner suburbs closer to the core — that are just dense enough to start to work in terms of infrastructure.  And they are very livable. And they have been around since the 1930s.  Here in Vancouver we can point to places like Kitsilano, but they exist all over the world. They are usually lower-rise, have a lot of diversity that has been built up over time, they have a lot of services, and they are able to pay for themselves from an infrastructure perspective. They also tend to be walkable and served well by transit. So what’s wrong with all that?

Another example popping up across North America right now is failed suburban strip malls with 50 or 60% vacancy rates that start to get interesting with nothing more than the introduction of bus rapid-transit. This is an inexpensive fix that can spark new development, and impact a suburban setting in very positive ways.  In turn, with a little more housing density – medium density in generally a low-rise configuration  — those strip malls become active service providers again and anchor whole new suburban nodes.

Then there is Gentle Densification, things you can do in single-family neighbourhoods through laneway houses and secondary suites — all of which slightly improve the densification and sustainability without causing all the big problems you’d have in those neighbourhoods if you tried to implement big changes.

So there’s three ideas. If you take those three, and more, you end up with this repertoire of tools and moves that could make the suburbs work very well.

LB: We need to get government and citizens and developers to realize that they need each other, and that they should stop all the fighting. The fighting is pointless and counter-productive. Governments are not going to build buildings, developers are. Developers are not going to govern the city and ensure services and infrastructure are provided. Citizens want everything to stay the same but want everything to be cheaper and better without developers or government. It’s all so ridiculous. The examples we found where all three players formed a coalition of sorts are the ones that led to successful outcomes. Everyone gives and everyone takes but in the end a better city is built. Our book goes over some of the policies and frameworks that encourage this sort of behaviour.

DA: Name the cities that you think are closest to getting it right.

LB: I think there are a handful of cities that provide interesting visionary ideas. By the way, no city has reorganized itself completely, and nowhere in the world is there a city where the work is done.

But Copenhagen has orchestrated a dramatic change in the way people move around, and in how densification is being applied. Stockholm and Malmo are other great examples to watch.  And Curitiba, in Brazil, has done great things with cultural and social facilities
and has developed very innovative transportation solutions.

So there is hope — there are lots of cities going in the right direction. Look at the High Line in New York! It’s spawned all kinds of positive change. Chicago has done a similar thing. Our book is all about hope! It’s about places where people are doing things differently.

DA: Conversely, what city looks like it is spiralling in an unhappy way towards more problems?

LB: Dubai is a city that seems to be applying all the worst ideas. And many American cities are still approving unsustainable suburban communities that don’t even meet economic viability standards let alone anything to do with Ecodesign. A big problem is that we are tied up in a straitjacket of obsolete regulations that end up creating places that we don’t like and that are unsustainable . . . because no one thought about these things when they were making all those silly rules. So first we have to work our way out of a set of obsolete and often contradictory regulations, and then create a new set of regulations that actually make sense.

David Allison works with executive teams in real estate development and other industries to craft the early-stage vision and brand for projects of all kinds. He crystallizes the most interesting version of any story for early stakeholder engagement, internal audiences, regulatory approvals, consultant briefings and investor recruitment. His award-winning work in the real estate sector alone spans decades and continents. His most recent book, The Stackable Boomer, examines the movement of baby boomers to multi-family homes, and includes research results from a 1,000-boomer survey. He can be reached at [email protected] and on LinkedIN