There was no major movement in capitalization rates across Canada in the fourth quarter of 2014, but the tug of war between record low interest rates and sub-$50 barrels of oil could make things more interesting for analysts in 2015. 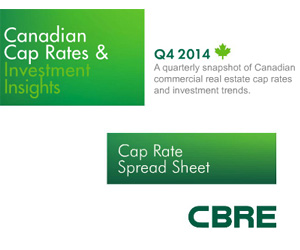 “Lower interest rates tend to drive cap rates down, while lower oil prices — particularly in energy markets — tend to do the opposite,” CBRE Canada director of research Ross Moore said following this week’s release of his company’s “Canadian Cap Rates & Investment Insights” report for the final three months of 2014.

“Lower oil prices are having an unsettling affect right across the country. Places like Ontario and Quebec typically benefit from lower energy prices, and I’m sure they will benefit this time around, but there’s still uncertainty because oil prices have fallen so quickly and by so much.”

Canadian employment and economic growth numbers are OK, if not quite as rosy as a few years ago, and Moore doesn’t envision anything collapsing despite heightened uncertainty about the global and domestic economies.

“Fundamentals are good and we’re not building a crazy amount,” he said. “People would look at downtown Toronto and downtown Calgary and say otherwise, but it’s really only those two cities and Vancouver.

“By historic standards, we’re not building a lot. We’re building a lot relative to the recent past if you go back five or 10 years, but if you look at a 20- or 30- or 40-year period, we’re not actually adding that much office inventory. I don’t think that anybody’s thinking that the fundamentals are going to weaken.”

There’s a significant difference between a 1.4 per cent return on a Government of Canada bond and from five to seven per cent on real estate investment properties. And with interest rates continuing to buck expectations while remaining low and even dropping instead of increasing, more people are looking at real estate opportunities.

“If you look at REITs since mid-December, they’ve been on a tear as a direct reflection that investors have in effect thrown in the towel and said we were planning for and expecting higher interest rates, and now we just don’t know so we just look at the pricing on REITS and it’s just too tempting,” said Moore.

“Some people have piled in and REITS are up 13 or 14 per cent in the last five weeks. It’s been quite a run.”

Highlights from the cap rate report

Downtown and suburban office cap rates were generally flat across the country, but there were some decreases in Winnipeg and Ottawa while Calgary and particularly Edmonton saw increases. This resulted in the national cap rate for downtown class-AA office space rising to 5.27 per cent and class-B suburban office space increasing to 7.3 per cent.

Industrial cap rates were stable nationally, resting between 5.25 and 5.75 per cent for class-A buildings and 5.5 and 6.25 per cent for class-B. But they were down in London, Windsor, Kitchener-Waterloo, Toronto and Montreal, and Moore believes there could be more movement in some of those regions.

“I’m tempted to watch Montreal,” he said. “I don’t know if we’ll see much movement in the office market, but in industrial and retail we could see something.

Cap rates for all five segments of the retail sector were flat across Canada, ranging from a low of five per cent in the regional category up to 6.25 per cent for open-air centres not anchored by food or drug stores.

Apartment cap rates down across Canada

Apartment cap rates were down across the board nationally, with class-A high-rise buildings dropping to 4.54 per cent and class-B high-rises sinking to 5.16 per cent. Rates for class-A low-rises and class-B low-rises fell to 4.94 per cent and 5.55 per cent respectively. The most noticeable slides were in Toronto, Ottawa and Montreal, while low-rise buildings in Calgary and Edmonton trended upward.

The downtown full service hotel cap rate rose to eight per cent across Canada, while the rate for suburban limited service hotels increased to 9.28 per cent and focused service hotels experienced an increase to 8.48 per cent. Rates were down in all segments in Halifax while doing the exact opposite in Calgary and Edmonton.

“Hotel cap rates moved up because the oil sector was a big revenue source for hotels and higher hotel room rates were easier to stomach when there was lots of money floating around,” Ross said of the increases in the two Alberta cities.