The value of Canadian farmland reached record levels in 2013 because of a limited supply of land coupled with peak commodity prices and low interest rates.

The market is expected to settle in coming months after several years of record-setting gains, with some investment funds having already scaled back purchases, according to the most recent Market Trends Farm Edition 2013 from RE/MAX.

Even so, the report stated that demand is expected to remain healthy for the foreseeable future.

Strong gains were seen in Saskatchewan, Alberta, and Ontario. Only the Annapolis Valley in Nova Scotia and British Columbia’s Fraser Valley reported no gain in prices year over year. But then the latter market is commanding $40,000 to $80,000 an acre compared to around $10,000 to $18,000 an acre elsewhere in Canada. 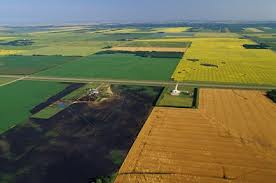 One growing trend is residential farmland use with an increasing number of hobby/gentlemen farmers purchasing property. According to the report, many of these purchasers will never farm an acre.

Rather, they are purchasing the land for recreational use, or taking advantage of the price, proximity to city, favourable tax rates and income potential.

The primary purchaser is still the established farm operators expanding existing operations. The report said cash-cropping land is the most sought-after, while bare land – with no buildings or residences – is in the greatest demand.

Private deals account for about 50 per cent of the transactions, with deals among neighbours common. While multiple offers have been reported, most properties are moving at or close to fair market value.

The report noted that a number of properties failed to sell at auction or tender, but still sold for good prices on the open market – “indicative that buyers are exercising greater caution and diligence.”

Affordability is a serious issue for young start-ups, smaller operators and immigrants as the competition amongst expanding farm operators has driven the price of land up. The result is fewer but larger farms.

Although the competition has created a barrier to entry for younger farmers, Canada’s leading agricultural lender, Farm Credit Canada, approved $2.3 billion in financing in late August to farmers under 40. That added to the agency’s total of $7.7 billion to help agricultural producers expand or start their operations in 2012-13.

“Buying money in the ground simply makes sense for many farmland purchasers, whether they intend to own/operate, rent the land, invest for the future or secure farmland acreage for residential purposes,” said Elton Ash, regional vice-president for Re/Max of Western Canada.

“The potential of the land is something farmers have believed in for years. That sentiment will continue to support a positive outlook for Canada farmland moving forward.”

Canada’s agriculture and agri-food sector employ more than two million people and account for eight per cent of the country’s gross domestic product, contributing more than $100 billion to the national economy annually.