At No. 28, Vancouver topped Canadian cities on this year’s list of the most expensive office space globally. 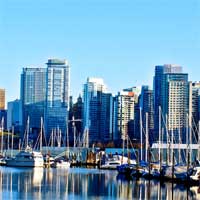 Vancouver’s office space, down one position from 2012, is a relative bargain by global standards at 442 euros per square metre per year, according to Cushman & Wakefield’s annual report on Office Space Across the World. Office space in London, which topped the list for the second year running, cost 2,122 euros in 2013.

Hong Kong held onto second spot as the most expensive office space globally, charging 1,432 Euros per square metre annually. Moscow moved up from sixth to third place with a rental rate of 1,092 Euros.

In terms of annual rental growth, both Calgary and Toronto experienced increases of one per cent, while Vancouver lost one per cent, and Ottawa and Montreal dropped by four per cent.

The rental trend for 2014 shows Toronto, Calgary, Vancouver and Montreal all experiencing drops, while Ottawa is expected to maintain the course.

Cushman & Wakefield’s report found that “Canada was slightly more subdued than other  North American markets, with rents holding up in the majority of key cities in 2013.”

Across the globe, office rents increased by approximately three per cent in 2013,  the third consecutive year they have grown by this amount. The cities with the largest rental growth were Singapore, Jakarta and New York City’s downtown.

Occupier trends across the globe were cautious as tenants remained concerned about costs, according to the report. “While some tenants were looking to upgrade to more efficient, cost-effective space, many still sought to consolidate their existing operations,” the report said.

In the United States, many markets saw increased demand for office space in 2013 as the economy improved at a stronger pace than expected.

New York and Boston were the exception as both experienced double-digit growth in key sub-markets, outstripping performance in most of the country. In Boston, the financial and professional services sector had a robust year bringing vacancy rates down and pushing rents up by 16 per cent in 2013.

Prime rental rates in downtown New York shot up 17 per cent due to vigorous activity in the technology, legal, advertising, media and health care sectors.

In 2014 the report anticipates that “the USA will lead the region (North America) in terms of buoyant economic growth.”

In the Asia-Pacific region, rental growth stayed largely flat because of a slowing economy though the economic climate did see some improvement over the course of the year.

Nonetheless, the Cushman & Wakefield reported that economic expansion in China and Japan’s was not enough to sustain regional growth and therefore many occupiers were notably cautious in 2013.