Vaughan Mills’ $87-million expansion and redevelopment that adds 50 new retailers to the shopping and entertainment centre north of Toronto was officially unveiled today. 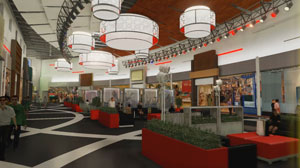 The expansion adds 18,600 square metres (200,000 square feet) of space to the east side of the Ivanhoé Cambridge property that already houses some 200 brand name and outlet retailers. The “Rural Neighbourhood” section grows by nine outlets while the “Small Towns Neighbourhood” adds another six stores.

The new wing also adds three new areas: an 18-store “Sport Neighbourhood” anchored by a Nike Factory Store and another large tenant that will be announced in the coming months; a 14-store “Event Court;” and a six-store “Digital Lounge” that will provide shoppers with immersive content, relevant information and interactive experiences.

“We pride ourselves on continuing to be industry leaders as we build on enhancing the shopping experience for consumers,” says Vaughan Mills general manager Stephen Gascoine. “Not only does our expanded retail roster include celebrated fashion and athletic-based retailers, it also comprises highly interactive and unprecedented feature experiences to engage consumers.

“Vaughan Mills has cultivated a one-of-a-kind modern shopping experience that offers impressive retailers and a fully connected destination where everyone in the family has something to enjoy.”

“With 37-foot ceilings and approximately 30 soft comfortable seats, the space can comfortably accommodate customers with special events and, on occasion, shoppers will enjoy a variety of live entertainment, including fashion shows, displays, celebrity appearances and small performances.”

The Sports Court includes 12 television monitors that will broadcast a constant stream of live sports from TSN. The fully wireless Digital Lounge includes 18 large video screens, some of which have full interactive capabilities such as touch and gesture.

The Outlet by Harry Rosen, Cole Haan, Ben Sherman and Vince Camuto will be added soon.

The expansion also includes a new entrance, 450 new parking stalls for a total of more than 6,300, and upgraded common area elements, including floor and ceiling treatments and energy-efficient LED lighting.

Final phase of project in 2015

Gascoine says further renovations will be finalized next year.

“The final phase of the project will be completed in 2015 and includes a redesigned food court offering new dining options. It will also expand service capacity in the 1,000-seat floor plan and allow for improved traffic flow by creating a new central ‘Speed-Lane’ feature. Additionally, a free Wi-Fi hot spot will enhance the property’s amenities.”

Vaughan Mills is located near major roads at the southeast corner of Highway 400 and Rutherford Road in Vaughan, about 32 kilometres north of downtown Toronto and adjacent to the Canada’s Wonderland amusement park. A York Region Transit terminal is located in the northeastern part of the property and a 49-seat shuttle bus makes two free round trips a day from Toronto’s Union Station to the centre from May 1 to Sept. 30. The Aloft Vaughan Mills hotel is located adjacent to the centre and offers “shop, stay and play” packages.

Vaughan Mills opened in November 2004 and was designed and built by Ivanhoé Cambridge and the Mills Corporation, which owns a portfolio of malls across the United States. JPRA Architects was the design architect while Bregman + Hamann Architects was the project architect. Ivanhoé Cambridge purchased the Mills Corporation’s stake in the shopping centre in August 2006.

Ivanhoé Cambridge, a real estate subsidiary of the Caisse de dépôt et placement du Québec, has assets held through multiple subsidiaries located mainly in Canada, the U.S., Europe, Brazil and Asia that were valued at more than $40 billion at the end of last year. Its portfolio consists mainly of shopping centres, offices and multi-residential properties.