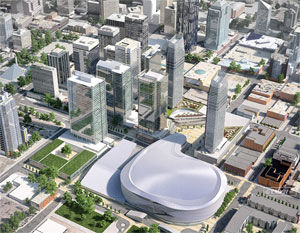 Savelli said there is no mystery behind WAM’s Eastern expansion. “Our investors have said, ‘You are long in the West and short in the East,’ so let’s get out East and grow this company and let’s be a national company. The Toronto office is obviously a main part of it.”

Savelli, who brings more than two decades of real estate development experience that includes investment analysis and landing anchor tenants most recently in a vice-president development role with Trinity Development Group, said WAM’s new space in the Standard Life Centre at 121 King St. West in Toronto will give it plenty of room to grow with space for eight to 10 people.

“That is kind of the goal for the next couple of years.”

More than just a pin on a map

WAM’s new Toronto presence is much more than just an Eastern outpost, explained Mulvale, who was most recently vice-president of leasing for Ontario and Atlantic Canada with SmartCentres.

That will mean plenty of flight time for the two men since most of WAM’s current retail development projects are taking place in Western Canada.

The most notable is the multi-billion-dollar co-development with the Katz Group centred on Rogers Place, the future downtown home of the NHL’s Edmonton Oilers. The $2.5-billion mixed-use sports and entertainment project will replace what is currently four million square feet of parking lots and one-storey buildings. Katz Group owns 90 per cent of the development with WAM holding the other 10 per cent.

The Oilers’ new arena will anchor the project (shown in image). A new $500-million office tower will be part of the 25-acre development with engineering firm Stantec Inc. reportedly signed on as an anchor tenant.

The City of Edmonton has also signed on as a tenant in a $280-million tower in the development which has been dubbed the Edmonton Arena District. The project will also include a casino-office complex that will house the Katz Group and Oilers headquarters. A hotel deal is also expected to be part of the project.

The project will also include urban retail “the likes of which Edmonton has never seen before,” said Mulvale.

“The dynamic nature of this development is game-changing,” he added. “This is city building, this is all the stuff that people talk about. This is not just another downtown enclosed shopping centre, this is not just some small high street retail, this is not a traditional power centre. This is a truly multi-faceted downtown urban development unlike anything Edmonton has ever seen.”

WAM also has two notable developments under way in Calgary. The first is the Metro Ford project on 9th Avenue SW, which will consist of about 1,800 rental units and 150,000 sq. ft. of retail over two levels in a development totalling 1.8 million sq. ft.

Currently the home of the Metro Ford auto dealership, the site is located at the western border of the downtown core with close proximity to rapid transit. Currently in the planning stages, the development is expected to include 1,800 luxury residential suites in four towers built above 150,000 sq. ft. of retail. 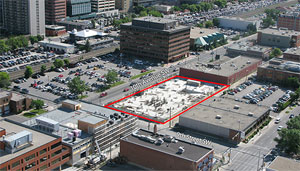 That’s a development type Mulvale is familiar with given his background with SmartCentres. He noted, however, the Toronto-based retail developer has more recently been working on mixed-use urban development.

“That is definitely the future of retail development in these mixed use type environments and it is exciting to be part of a team like this that is so multi-faceted with the expertise that WAM has in office and multi-family res,” he said.

“When you add to that, Stefan’s and my retail experience and it is now a very well-rounded organization.”