With Ivanhoé Cambridge’s announcement last week that it had sold the Fairmont Hotel in Washington, D.C. for $180 million to MetLife, Inc., the company’s hotel holdings are now down to six and its divestiture of such assets is inching towards a close. 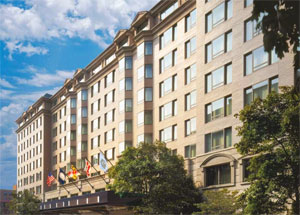 The Fairmont has a four-diamond rating from AAA and is one of the premier luxury hotels in the U.S. capital. It was built in 1985 in the west end of the city near the Georgetown district and was renovated in 2002. It features 385 guest rooms, 30 suites, 28,000 square feet of meeting space and 4,800 square feet of executive conference space. It’s also one of just three hotels in the city with a large outdoor amenity space.

“This was a great opportunity to acquire a luxury asset in a top-tier market,” said Robert Merck, senior managing director and global head of real estate investments for MetLife. “It will complement our strategic approach to real estate and generate the kind of steady cash flows we need to meet our long-term policyholder obligations.”

Fairmont Hotels & Resorts will manage the property for MetLife, which has nearly $59 billion in real estate invested assets, including $43 billion in commercial mortgages and nearly $16 billion in equity investments.

Ivanhoe down to six hotels

“We are pleased with this transaction, which brings us closer to the completion of our long-term hotel sales program,” said Sylvain Fortier, Ivanhoé Cambridge’s executive vice-president of residential, hotels and real estate investment funds.

Ivanhoé Cambridge, a real estate subsidiary of institutional fund manager Caisse de dépôt et placement du Québec, has identified its hotels as non-strategic assets in its $40-billion portfolio consisting mainly of shopping centres, office and multi-residential properties. It had 70 hotels valued at more than $3 billion when it established a disposal program in 2011, and a continued sell-off has that number down to six.

The company plans to keep Quebec City’s Fairmont Le Château Frontenac and Montreal’s Fairmont The Queen Elizabeth and W Montreal. It has also retained a 20 per cent stake in Toronto’s Fairmont Royal York Hotel after selling a 60 per cent share to KingSett Real Estate Growth LP No. 5 and the remaining 20 per cent to InnVest Real Estate Investment Trust in October.

Ivanhoé Cambridge VP of public affairs and media relations Sébastien Théberge said the Fairmont Olympic in Seattle and Fairmont Hotel Vancouver are in different stages of a sales process.

The company has been involved in several recent transactions as part of its plan to focus on asset classes that best meet its overall investment strategy.

“Our business plan calls for investing in 15 or 16 key cities around the world and building platforms with critical mass in those cities,” said Théberge. “We focus on what we know best: retail, office and multi-residential properties. We’re also in funds to diversify. We’ve also made our first investments in logistics with TPG in Europe.

“In order to generate the returns that our investors are seeking, we must strike the right balance between investing in core assets, which generate stable but lower returns in the single digits, and value-added assets which can generate above 10 or 12 per cent or more.”

Ivanhoé Cambridge is redeveloping and expanding its downtown Montreal retail properties as well as such high-performing locations as Vaughan Mills in Vaughan, Ont., CrossIron Mills in Calgary, Oakridge Centre in Vancouver and Place Sainte-Foy in Quebec City. It’s also developing new properties at 45-141 Bay St. in Toronto, Tsawwassen Mills in Tsawwassen, B.C., Outlet Collection at Winnipeg, The Outlet Collection at EIA in Edmonton, Maison Manuvie in Montreal and River Point in Chicago, among others.

Ivanhoé Cambridge’s strategy also involved the sale of 11 shopping centres, three office buildings and one industrial property — all in Quebec and Ontario — to Cominar Real Estate Investment Trust for $1.53 billion earlier this year. Ivanhoé Cambridge purchased $250 million in new units from Cominar as part of the transaction, giving it 8.4 per cent of the company’s units and making it the REIT’s largest unit-holder.