Wetmore leaves Canadian Tire in better shape than he found it

Stephen Wetmore, who retired as CEO of Canadian Tire on Dec. 1, left an indelible mark on Canada’s most iconic retailer through the formation of CT REIT and the launch of its new e-commerce platform. 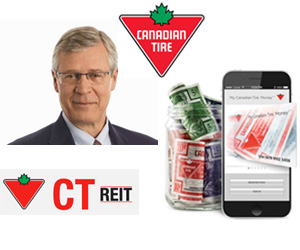 At this year’s Toronto Real Estate Forum, CBRE Canada CEO John O’Bryan had a one-on-one conversation with Wetmore about his experience as head of Canadian Tire, beginning with the numerous challenges and opportunities he faced when he first took the reins on Jan. 1, 2009.

“Canadian Tire had an attitude problem more than it had anything else,” Wetmore said.  “We had the best brand in the country although it had slipped a bit. We had stores through Canadian Tire in almost every community in Canada.

There were nagging problems, however.

“We got off course and the organization was playing defence, not offence,” said Wetmore. “We just needed a bit of spark, a bit of vision and encouragement.

“When I started in 2009, the economy wasn’t in great shape (and) there are not many industries in Canada that survive with international competitors.”

CT through a real estate lens

Early on Canadian Tire’s real estate became the cornerstone of Wetmore’s plan for reviving the company.  He identified Ken Silver current CT REIT CEO as one of his most important sources for understanding Canadian Tire when he arrived on the job.

“When I joined CT, Ken gave me the most insight into the business,” Wetmore said.  “His view of Canadian Tire was unbelievably accurate.”

“He could tell me what every store was doing in every community . . .  what our customers were doing and how they were reacting . . . the size of stores we should and shouldn’t grow . . . where business in local towns was moving . . . whether we were doing well in suburbia or not.”

Under Wetmore’s leadership, Silver became the head of strategy and, along with other senior executives at CT, created a new plan for the company. “It all came through the real estate lens,” Wetmore said.

When Wetmore took over at CT, it owned about 70 per cent of its real estate and had been buying and selling for years and probably “selling for the wrong reasons,” he said. With Currie’s advice in mind, Wetmore formed a single-purpose real estate entity when the opportunity arose.

“It has been extremely successful.”

Bricks and mortar versus e-commerce

Canadian Tire’s online shopping website was shut down shortly after Wetmore took over as CEO.  “We were absolutely not prepared for it. It simply wasn’t working,” he said.

One of the challenges was the retailer’s relationship with its dealers, who are integral to the company’s operations and the decision-making process within the company.  There are 492 dealers in the CT network and 30 committees between the corporation and the dealers.

“We own the stores. We own the property. They buy the product from us,” said Wetmore. “The dealers are individual entrepreneurs. A dollar they earn is a dollar in their pocket.  They look at head office decisions with suspicion.

“With e-commerce, we could in effect sell directly to the customer and that would turn our business model upside down,” Wetmore added in reference to its dealer network.

As a consequence,  it has taken years for Canadian Tire to build its infrastructure and website and to negotiate an agreeable arrangement with the dealers, Wetmore said.

With those goals in place, a few months ago Canadian Tire launched its digital loyalty program and already has about 28 per cent of its customer base signed up. “For the first time, we know who our customers are,” Wetmore said.

The loyalty program is one aspect of the CT e-commerce platform that also includes online purchasing and a mobile app. Canadian Tire has about 700 retail outlets in its network that will serve as the drop-off and pick-up points for online purchases. The outlets are being established in 450 Canadian Tire stores and auto centres, 425 FLG Sports locations and 380 Mark’s.

When fully implemented, Wetmore expects Canadian Tire to sell more from its physical stores than ever before.

“The opportunity for us is tremendous,” he said. “We don’t believe at all that it means smaller stores or lesser real estate.  It means bigger stores and more real estate.

Wetmore’s legacy at Canadian Tire extends well beyond real estate and e-commerce, though. Under his leadership, CT became an Olympic sponsor and also established Scotiabank as its partner for its banking program.

A new CEO at Canadian Tire

On Dec. 1, retail veteran Michael Medline took over the role of CEO of Canadian Tire from Stephen Wetmore.

Over the course of his 14-year career with Canadian Tire, Michael has led many of the company’s most important strategic initiatives, including the acquisition of Mark’s in 2002, the acquisition and subsequent integration and leadership of the Forzani Group in 2011, and the Scotiabank partnership in May 2014.