Why is Morguard building The Heathview? Why not condo?

The Heathview is nearing completion in the tony Forest Hill neighbourhood in Toronto. 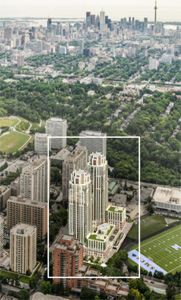 The Bay Club, at Bay and Wellesley in Toronto and completed about 10 years ago, is the only other purpose-built apartment building owned by Morguard, which begs the question: Why build now and why The Heathview?  Why not build a condo?

The Heathview was presented as a case study for “how high-end new rental buildings are competing with the condo market” at last week’s Canadian Apartment Investment Conference (CAIC) by Brian Athey, vice-president of Morguard North American Residential REIT (MRG.UN-T).

One rental tower by necessity

Morguard acquired The Heathview property in 2000 as part of the Goldlist portfolio. The 2.3-acre site had an existing 12-storey rental building completed in 1962 with two levels of underground parking, 246 units and 102 furnished suites. Athey says the underground parking structure was crumbling and the building was in poor condition over all.

Goldlist had initiated a planning application that requested replacement of the existing apartment building before Morguard took over. A friendly Ontario Municipal Board decision in 2010, following several community meetings, resulted in a significantly increased density to 5.5 times the site area allowing 596 units in two towers.

Under the City of Toronto’s Rental Replacement Policy, the OMB required that Morguard provide 146 designated replacement units with a specific unit mix, rents and a relocation package for existing tenants.

After initially planning for one tower to be rental, as required by the OMB, and the second to be condominium, Morguard opted to go with two rental towers during the design phase, Athey said.

A second tower rental by choice

That decision was likely swayed by the trend toward good multi-res returns as evidenced by the performance of Morguard’s own portfolio.

“There has been a 16 per cent return for multi-unit residential for TSX listed entities assuming a reinvestment of distributions and dividends since 2010,” CBRE vice-president Paul Morassutti said during his CAIC conference presentation.

It may also have been influenced by Morguard’s positive experience with The Bay Club. “It (The Bay Club) looks as good now as the day it was built,” said Susan Morasse, a Toronto district manager for Morguard now responsible for rental activity at The Heathview.

Morguard’s extensive market analysis also found that a new high-rise infill development site in midtown Toronto was a rare and a timely opportunity, according to Athey’s presentation.

The study revealed an unmet demand for new rental product that could carry an average rental rate of $2.67 per square foot with an average sales index of $545 per square foot.  Most households were single (66%), used transit and were of relatively high income.

The Forest Hill Village neighbourhood, highlighted as affluent and amenity-rich, is a well-established area with local shopping, dining and services. There are acres of nearby parks and walking trails.

There is an existing high-rise community with two 25-storey rental buildings and an 18-storey condominium in the vicinity of The Heathview that would provide peer residency in the area and from which it could draw tenants. The site is 100 metres from the St. Clair West subway station and it is about half an hour ride to downtown Toronto.

A preference for rental over condo

Rental rates at The Heathview are well above the Toronto average, approximately $1,200 a month for a two-bedroom apartment.  A 690-square-foot one-bedroom plus den at The Heathview rents for $2,200 plus hydro, parking and locker, for a total of  $2,500 per month. An 880-square-foot, two-bedroom is $2,700 and about $3,000 with all the perks according to Morasse.

As one might expect at these rates, a condo rental or condo purchase option is “The Heathview’s main competitor,” according to Athey.

To compete, the Heathview has a luxury condo ambience, condo-grade finishes and spectacular views of downtown Toronto and the neighbourhood from the upper floors of the building.

The Heathview is striving for LEED Gold status, a prerequisite for class-A status in any building type.  It is targeting 32% energy cost savings versus a similar reference building, a benefit to tenants who will have metered units and pay their own utilities.  It has dual flush toilets, stormwater retention and irrigation, car share programs and green roofs. 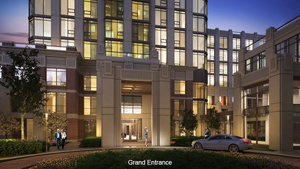 The Heathview opened its doors to prospective tenants in March, kickstarting its rental program by welcoming back about 30 tenants living in the building acquired from Goldlist.

While the new building is under construction, Morguard is undertaking an extensive marketing program including model suites (like a condo), multi-media marketing where its website has generated more than 50% of the enquiries and a presence in the neighbourhood, which is no doubt giving its rental program a lift.

The north tower with 341 units is slated for completion in early December.  It is already occupied to the 16th floor and almost fully rented.

Interior finishing is underway in the 255-unit south tower and the lower half of the building will be ready for tenants by early December.  The south tower already has a waiting list.

The Heathview by all accounts is a success to this point but at what price? According to Athey, the north tower has an approximate cap rate of five and the south tower about seven, beating out the sub-four cap rate associated many new purchases in the multi-res market.

“Its an exiting project,” said Morasse. “. . . when something goes wrong in their apartment, they can pick up the phone and we’ll be there to fix it.  You can’t do that in a condo.”

Unlike a typical condo rental, Morguard would prefer their tenants stay forever.