After a year-long international search, American Will Fleissig has been named John Campbell’s successor as Waterfront Toronto’s president and chief executive officer. 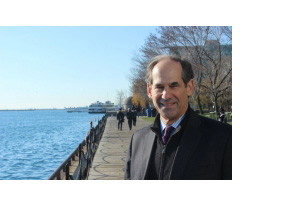 “The Waterfront vision, the continued commitment to that vision by all three government partners, and the significant milestones already achieved by Waterfront Toronto’s staff presented a compelling opportunity,” said a statement from Fleissig, who has more than 30 years of experience in real estate development, urban design and planning, public finance and environmental stewardship.

“I am honoured to undertake this world-class city-building effort, and am committed to add to this great city rich, diverse, and vital new communities that all Torontonians will be proud to bestow to future generations.”

John Campbell has served since 2003

Campbell had held the post since April 2003 and announced his plan to retire last year after racking up several impressive accomplishments at the agency created by the federal, provincial and municipal governments to oversee and lead the renewal of Toronto’s waterfront.

More than 300 people applied for the job and 11 were selected for consideration before Fleissig was identified unanimously as the preferred candidate.

Fleissig’s most recent position was president of Communitas Development, a real estate development and advisory company in San Francisco that focuses on sustainable, transit-oriented and mixed-use development of urban infill sites.

From 2005 to 2010, Fleissig was a partner in Urban Villages Inc., which co-developed West Village at the University of California, Davis. The 130-acre campus district for 3,000 students, faculty and staff members includes a mixed-use village square with shops and services, a community college, parks and a fitness centre.

It’s the largest planned “zero net energy” community in the United States and is scheduled for completion in 2017.

Fleissig and his family will move to Toronto in January, when he’ll assume his new job and its annual salary of $350,000 plus a performance-based bonus component.