Is the sun setting on Toronto’s long-running condo boom? 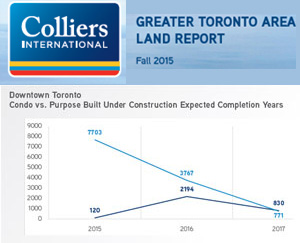 Probably not, but builders are finally paying attention to the purpose-built rental apartment sector and that long-neglected sector is expected to exceed new condominium construction within two years.

That’s the forecast from Colliers International’s Greater Toronto Area Land Report Fall 2015, a deep dive into the use of land for residential development.

To date in 2015, close to $2.5 billion has changed hands in GTA land transactions, mainly on either high-density or low-density purchases, with developers representing 72 per cent of sales, followed by private investors at 23 per cent.

That’s a slight increase in sales in the second and third quarter of 2015, and is above comparative quarters in 2014. Purchasers were paying more per acre than in the previous year.

The real news is the “transformational shift” represented by the surge of purpose-built rental apartment units in the downtown core scheduled to be completed in 2016.

If this trend continues, 2017 could be a year when rental apartment units exceed the number of new condominium units constructed (Illustrated by the graph from the Colliers report above.)

“Everybody has seen some of these older apartment buildings starting to deteriorate – really nobody has been building new apartments for rental for a long time,” said senior managing director Daniel Holmes.

“The cap rate on existing product is trading at historical lows that will never probably be duplicated again in the size of the market we are in, buildings trading at 3 caps downtown.

“I think that people are just looking at it long-term and saying if we can build this and fill it up at historically low vacancy rates, these units will fill up.

“The amount of immigration and population density that is still moving back into the city; these are long-term players that are doing it. This isn’t a ‘build it, fill it and flip it” kind of thing.”

That model is, of course, the one used so successfully by condo developments. In recent years, those new GTA condos have served as rental stock for the apartment-starved metropolis with estimates of more than half of the units owned by investors.

“They have been using condos as apartment buildings. I think that is starting to change a little bit where some of the larger pension funds are saying, ‘These numbers are really thin, but we gotta get into the game.’ ”

Where is it happening?

It’s clearly not a suburban phenomenon as developers are looking to tap into downtown-working Millennials who either prefer to rent or perhaps are already priced out of the condo market.

That is showing up as a “noticeable decline” in the expected supply of new condominium units and a noticeable increase in the supply of new purpose-built rental apartment units.

The purpose-built developments are currently only located close to downtown Toronto, in areas such as King Street West and Queen Street West, hotspots for young professionals.

It has also shown up in land purchase activity, with most completed land sales in the City of Toronto located in the west side of the downtown core.

The Yonge and Bloor neighbourhood, the interchange of the TTC’s lines 1 and 2, was another strong area for land purchases, Colliers noted.

Colliers hedges its bets in the report, stating that while it expects new apartment construction to outpace condos in the GTA in 2017 it is “uncertain whether this trend will continue.”

Holmes, who works out of Colliers’ north Toronto office, is more optimistic about the future of apartment builds.

Colliers found the largest land transaction by far in the GTA to date occurred in Markham, a deal Colliers International worked on “from start to finish.”

The 417-acre York Downs Golf and Country Club sold for $412 million and represents the largest land deal the GTA has seen in many years.

“Notable about this deal was the value per acre, at slightly more than $1 million per acre, the highest in the GTA this year. This is a testament to the growing value of land in the GTA as availability lessens due to robust development throughout the region.”

In the suburban GTA markets, York Region, Peel Halton and Durham all reported rises in transactions, particularly in the cities of Oakville and Pickering.